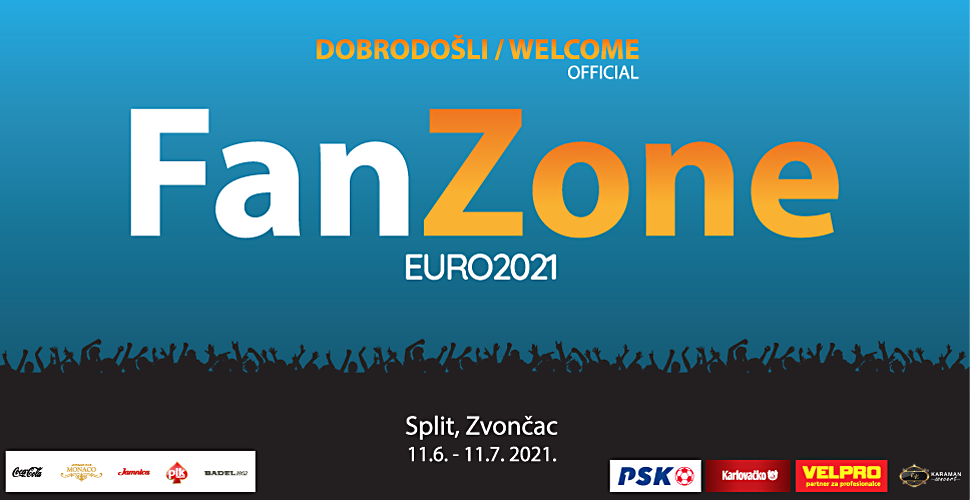 June 9, 2021 – The Split Zvončac EURO 2020 Fan Zone has finally been announced, where football fans can gather to watch all European Championship matches.

Citizens of Split likely remember the last football Fan Zone, organized in 2018 in Đardin, during the World Cup. This year, the EURO 2020 fan zone will work from June 11 to July 11 at the legendary Zvončac park, a location many Split citizens adore, reports Slobodna Dalmacija.

The Fan Zone will also be organized by Damir Karaman, with associates from the company “Karaman Koncert,” which has so far successfully organized numerous sports, cultural, and entertainment events in Split.

Visitors will be able to watch the games on a large screen and enjoy food and drink.

“During the duration of the tournament, we will organize various prize games and events,” said Damir Karaman.

Which performers and bands will play at the Fan Zone?

“We are still negotiating, but it will be a surprise for the days off at the European Championships, when we will fill the space with various programs. It is normal for fan zones to be held in city parks so that people can hang out and have fun. Zvončac is ideal for us because it is bigger than Đardin. That is why I, in cooperation with the Split and Split-Dalmatia County Tourist Boards, organized it in our city. Well, God willing, we will create a fan zone next year for the World Cup,” said Damir Karaman.

“All foreigners who were in Split knew about the fan zone, and when their national teams played, but also others, foreign tourists came there to watch the matches.

We must emphasize that several media houses reported from the Fan Zone – the German Bild, Danish television, and reputable portals. HTV, RTL, and Nova TV also reported from the fan zone, so it was more marketing for the city itself, and great promotion,” said Karaman and pointed out that he will organize everything according to current epidemiological measures, in agreement with the Civil Protection Headquarters.

Admission will be free.

As before, admission will be free for all citizens and tourists, no matter the program.