“The rain added something magical, and I felt like Indiana Jones” 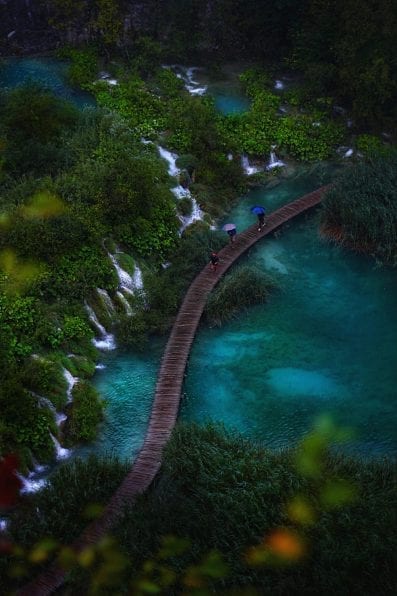 Brieuc Mellier, a 20-year-old french neuropsychology student recently went on a interrail trip in the Balkans with a friend. After having seen hundreds of pictures from Plitvice Lakes, it was obviously the place were on their bucket list! As a fans of waterfalls and forests,  Brieuc adds, they NEEDED to come here. “It was not autumn but the end of August, still it was raining a lot! It didn’t ruin anything at all because not so many people were there and it just added something epic about the place, something magical! The clear waters weren’t affected by the fog and the lack of light at all! And some autumn colours were there on the trees – it was truly powerful!”

He admits that the wooden bridges were a true challenge during the photoshoot. But the result was, as you can see, truly spectacular. “Gaps were separating logs and I was afraid of losing my phone for example, but it made it so cool to feel like you are Indiana Jones! There were so much rain that I needed to walk on the edges of the roads to avoid the puddles although my feet were having a bath and the shoes I wore at that time went to trash. Next time, I should take more serious shoes!” Brieuc photographs almost every day – landscapes, portraits, funny and weird things… but nature and travel photos are his passion. That’s why he is always in a search for new, different places…

Plitvice were definitely picturesque! Both for landscapes pics and portraits. Until now, the place I have truly learned to love is Canada. But no place there reminds me of Plitvice! That is why I would recommend Plitvice Lakes to any nature lovers who want to take some pics and having a meal in one of the most beautiful and romantic places of the world. I sincerely hope I can come back one day under the snow or with a huge sun, or both !

See you next time Brieuc!