52 PLACES TO GO IN 2019 The New York Times traveler coming to Croatia! 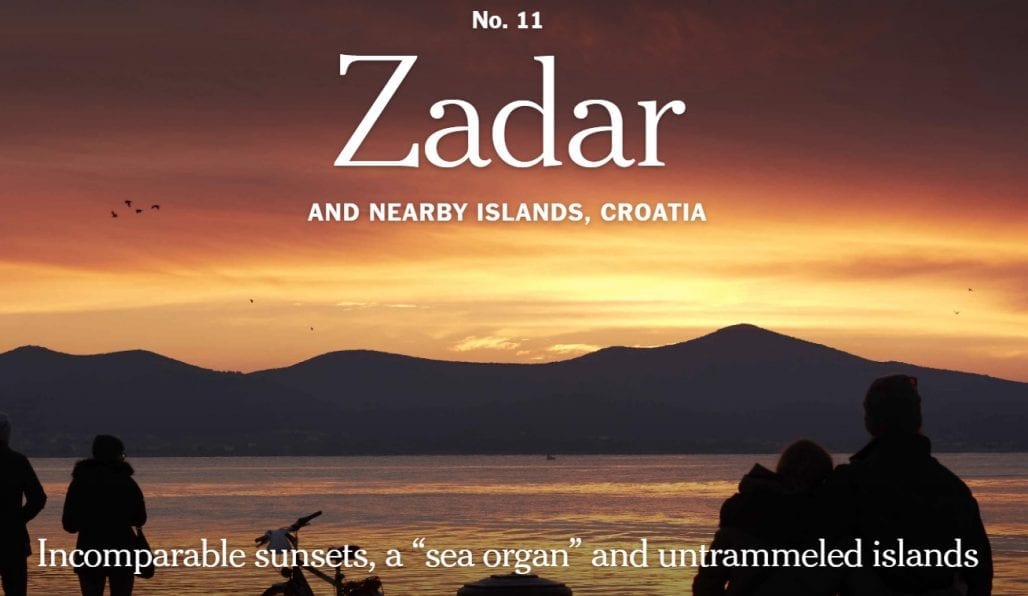 This year, they’re sending another intrepid journalist, Sebastian Modak, to do the same, and guess what – Croatia is on the list!

“Once again, we got applicants from around the world and from a variety of backgrounds (meet some of them here). After weeks of assessing them, we settled on a handful of finalists. From that group, we chose Sebastian Modak, one of our finalists from last year, and a journalist with an impressive background and résumé. Just weeks before he sets off to his first destination — Puerto Rico, which took the No. 1 spot on the list this year”, say from the New York Times.

No 11 on the list are Zadar and nearby islands and here are a few reasons why Zadar made it to the list!

It’s all starting to feel pretty real. Some crazy news: Over the next year, I’ll be traveling to every one of the @nytimes 52 Places to Go in 2019. I’m so many things right now, but most of all grateful for such an incredible opportunity. Just about a week and a half till lift-off. Let’s do this! Head to @nytimestravel to see the full list of places. #52places2019

“After the Croatian soccer team captured the world’s attention in the World Cup last summer – its team captain Luka Modric’s inspiring play was particularly notable – soccer fans revved up their search engines and learned that Mr. Modric hails from Zadar, a pretty, compact town on the Dalmatian Coast. Zadar is often ignored as visitors hopscotch from Istria in the north to Split and Hvar and then down to Dubrovnik. But that may be about to change, especially with Ryanair adding regular flights from Prague, Hamburg, Cologne and Nuremberg, starting this spring. Beyond Zadar’s medieval core, the city’s seaside promenade and music-making “sea organ,” created by the architect Nikola Basic, is a must-see (or hear). The magical sunsets alone were enough to wow Alfred Hitchcock, who visited the city in 1964, and said he’d witnessed the most beautiful sunset in the world there. The town is also a gateway to untrammeled islands, especially Dugi Otok; an hour-and-20-minute ferry ride takes visitors to the sparsely populated island with uncrowded beaches and taverns serving seafood. Seeking ultraclean waters? Then head to the island of Pasman, where the currents frequently change, making the surrounding waters some of the cleanest in the Adriatic.” says David Farley for The New York Times.

Meet @sebmodak, our new #52Places Traveler for 2019. He’s excited to start his journey, and soon, he’ll be heading off to Puerto Rico, the top destination on the #52Places list. He writes: “For me, travel is all about immersing yourself in the unfamiliar, and embracing the feeling of humility that comes with that: There’s always something to learn from someone else, from somewhere else.” Follow Sebastian at @sebmodak as he embarks on his journey around the world. He’ll be appreciative of your insight along the way. Check out the link in our profile to see the 2019 list. Photo by @trittscamera.

Sebastian is very excited for the upcoming, whole-year-round adventure.

“I’m ready to embrace all the uncertainty that comes with an opportunity like this and see where it takes me.”

The FULL LIST OF 52 PLACES WHERE SEBASTIAN WILL TRAVEL IS HERE!