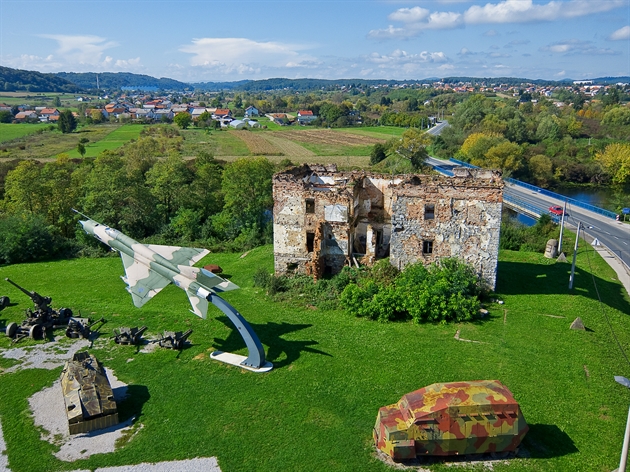 Those are exhibit articles of weapons of Independence war on the front line in 1991-1995 in Karlovac district Turanj. The collection is set up on the battlefield of the worst fights of Croatia army, which defended Karlovac, by the main road Karlovac -Plitvice Lakes. The events in the Homeland War once again proved the importance of Turanj as an advance guard for Karlovac. In Turanj, the Croatian defenders halted and forestalled the enemy’s attempts to seize the city. This place also bore witness to numerous negotiations on truce, exchange of war prisoners, and admission of refugees and displaced persons.

For the citizens of Karlovac, Turanj is a symbol of victory and return, of new life emerging in war-torn areas. On the army barracks site, today one can find remnants of the facilities damaged by combat activities in the Homeland War, subsequently further devastated. The area around the facilities is the location of means of combat from the collection of weapons and army vehicles of the Homeland War. In the future, Turanj should become a place of research and communication of the insights into the role of the city of Karlovac and the Karlovac region in the history of Croatia and Europe.

The first step is to refurbish the area for the Karlovac 1991-1995 exhibition, in the building that was popularly called Hotel California by the defenders in the Homeland War.