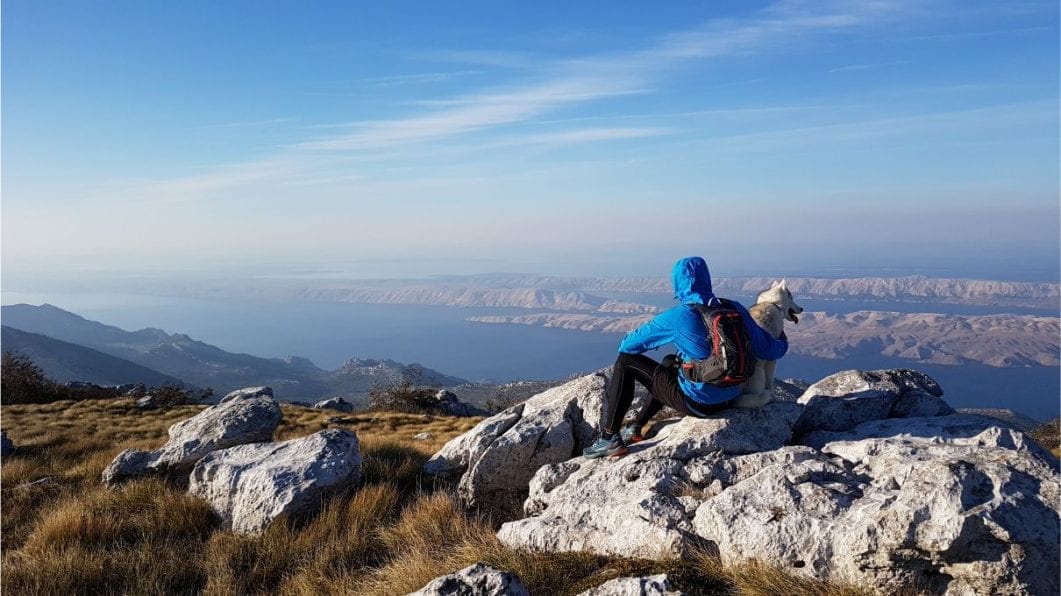 Ante Tonči Fabris, manager of Outdoors Croatia project, is known for many adventures with his second-half – the beautiful Siberian Husky Mishka, who`s become a true media star in the past few years.

Ante grew up in Korčula, where he fell in love with nature and outdoor activities and with time he began to do sports – first mountain bike riding and running, then hiking, climbing and mountaineering.

After Mishka entered his life, a lot of things changed, and their diverse adventures from numerous destinations have become a favourite viral content.

“I have actually decided to buy Mishka for my wife after I found a letter she`d written as a little girl to her parents, in which she pleaded them to buy her a dog. After Mishka, our two girls came really fast, so now we`re a big family. “ For their first joint journey, they have chosen the Alps, where they enjoyed the frozen downhills and exposed peaks but gradually turned towards Croatian nature, whose wildlife they both adore. Millions of people have seen their videos from numerous locations, but one video in particular stands out – the magical winter video from Plitvice, which went viral worldwide, mostly because of the world famous media coverage. “I watched the forecast and saw that after a couple of days of low temperatures a lot of snow would fall, followed by a clear sky. We started our journey very early, we actually ran the whole circle around the Kozjak Lake, and we only slowed down on wooden walkways to enjoy the beauty of the frozen waterfalls.

Plitvice are a phenomenon, not only because of its beauty but also because of the great number of fans that we have to give the credit to for sharing the video.” Ante and Mishka have many favourite destinations in Lika that they regularly visit.

“Many of our favourite places are in Lika-Senj County –  Gacka River, beautiful cycling trails between Vratnik and Oltari passes, Zavižan, Premužić’s trail, the magnificent old road through the Dabarski kukovi, the most beautiful Croatian peak – Sveti Brdo and below it Dušice. I don’t even have to talk about Pag and the coastal side of Velebit. Croatia, and especially Lika have great outdoor potential, but continuous work is needed in order for it to come to life. I personally regret the most that there aren`t more good mountain bike trails whose construction doesn`t represent a great investment and are an excellent motivator to go to a location. ”

Aside from the basic equipment, Ante carries sandwich and sweets in his backpack for him and Mishka, which they share when they reach the top or come to a nice spot. He`s given our readers very useful tips on how to prepare pets for adventure. “Dogs do not need any preparation and that’s what we can learn from them. In the beginning, I was very worried about Mishka. I was afraid that the hunters would shoot her, that she would get injured from the clash with wild boars or that she would run into the minefield. Still, I think Mishka would take all those risks just to be free. I would recommend to people just to start the adventure, and everything else will come by itself. ”

Lastly, we asked him the most important thing – can he imagine his adventures without her company at all? “Mishka goes everywhere with me, in nature, to work, to meetings. Wherever she comes, people are delighted. When I go somewhere without her I have that feeling that I have forgotten something.”

Good luck Ante and Mishka we will keep track of all your adventures!