ANTE STARČEVIĆ “The Father of all Croats” died on this day 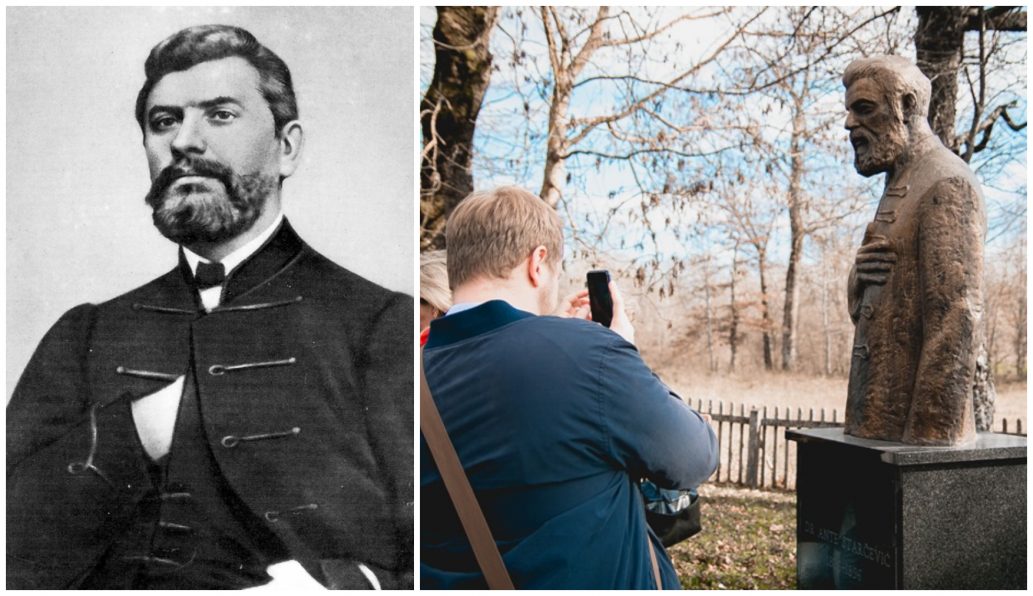 Ante Starčević, one of the greatest people in Croatian political history, also known as “The Father of all Croats” or “The Father of Homeland” died on this day, February 28, 1896.

Born in the village of Veliki Žitnik in Lika, his family taught him to love his homeland with his whole heart even as a child.

Ante was a tall, dark man, with manly features, thick black hair, and dark eyes. Just like all children in Lika, he spent his childhood barefoot, poorly dressed, and was used to poverty since childhood, which left deep marks on both his body and his soul. This was the source of his sickly nature, which especially afflicted him through school and young adulthood. Just as he inherited his mother’s physique, he inherited many mental features from his father, most of all his sense of humor and intellect.

In the Starčević home, the rules of tradition were adhered to strictly, and so Ante learned to love his country early; he loved it deeply and often spoke of it as of a beloved woman, with passion and fidelity.

Thus, the frame of Ante Starčević’s character had already been formed in Žitnik. When he was 13, he moved to Karlobag with his uncle Šime; there, his uncle passed on his political views and a sense for the vernacular, a respect for its archaisms and a resistance to novelty. In Karlobag, he shaped his language to a higher degree than his uncle’s, and developed an affinity for literature.

His uncle also taught him the first broad concepts regarding his nation, its aspirations, its enemies, concepts such as natural law, a sense of bygone times, and those who were cheating it out of its rights.

In Karlobag, therefore, Ante fully formed his political views, to which he would stay true over the entire course of his life. Uncle Šime had seen that Ante was a very intelligent child, to whom he would easily impart his understanding of the nation and its facets.

Šime, who was already quite old, soon sent Ante to stay with his friend Joso Vlatković (a pastor in Smiljan) for further education. In Karlobag and Smiljan, Ante learned Latin, arithmetic, geography and natural science, and acquired the curriculum for the first two years of grammar school. This private education lasted for three years, and in the autumn of 1839, Ante—then 16 years old—went to Zagreb to continue his grammar school education.

The period of the 1848-1849 revolutions, both across the world and in Croatia, was a formative experience for Starčević, fully shaping his personality and determining his course in life and work. He criticized the actions of the leaders of the Croatian revolutions, and even thought badly of them because he believed them to be servants of Austria (e.g. ban Josip Jelačić).

He became disillusioned with the Croatian national revival due to its failure to achieve real autonomy for Croatia and to sufficiently awaken the national consciousness of Croats.

He was deeply hurt by the injustice done to Croatia with the introduction of the Octroic constitution and the neo-absolutism of Franz Joseph I in 1849. Ante Starčević always had the idea of uniting all Croatian lands, and to him, this was a “sacred cause”.

He advocated the idea that Croatia could only attain independence through the emperor fulfilling his rights and duties to the nation to which he was accountable.

If you want to read all about his political activism you can do it HERE.

In his old age, he moved to Starčević House (Starčevićev dom), built for him by the Croatian people in 1895. He died in his house less than a year later, aged 73. According to his wish, he was buried in the Church of St Mirko in the Zagreb suburb of Šestine. On his deathbed, he requested that no monuments be raised to his honor, but his statue was put up in front of Starčević House in 1998.