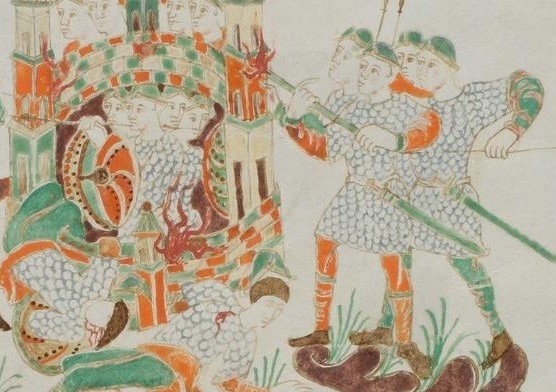 The sword is the most famous weapon of the Middle Ages, a weapon that played a special role in the life of a medieval knight. But in the early Middle Ages, the Slavic people did not use swords. They were armed with spears, axes, bows and arrows. So how did the sword become the weapon of the first Croatian warriors?

We will find the answer to this question if we analyze the earliest swords in Croatia. They appear at the end of the 8th century and were found on the sites of ancient battlefields and tombs of warriors. One such sword was found in Prozor in Lika.
Let’s take a closer look at the sword. The double blade of the sword is 77 cm long. The sword has a straight cross-guard, and the sword`s pommel is decorated with silver wire.

We call this kind of sword, a long sword. Compared to the short sword, the long sword has many disadvantages. A warrior with a short sword is much more agile and faster than a warrior with a long sword. The short sword is ideal for close combat in a confined space. Then why did the long sword become more popular in the Middle Ages? A long sword has a stronger shot and a longer range, and keeps the opponent at a distance. The long sword is suitable for fighting on horseback and in the open field. The first medieval swords were one-handed just like the sword from Prozor, and later, with the development of stronger armor, swords became longer, heavier and two-handed.

The sword from Prozor is similar to other swords from the early 9th century found throughout Europe. During the time of Duke Borna, who was an ally of the Frankish Empire, Croatian warriors began to carry expensive Frankish weapons.

Frankish weapons were a status symbol not worn by ordinary people. The sword from Prozor belonged to a warrior from Borna’s entourage, one of the nobles who lived in the Lika fortifications. Carrying expensive and impressive Frankish weapons, Borna’s warriors left a strong impression among the people which helped them maintain power.
In the Germanic world, the sword was not only a weapon, but also a ceremonial object. During the oath to the German kings, the nobles laid their hands on the hilt of the sword. Probably the Frankish emperors donated swords to Borna and his warriors as a symbol of their alliance and loyalty to the Frankish court.
Thanks to Borna’s policy, the first Croatian warriors carried European weapons. Apart from the war equipment, the connection with Western Europe also influenced the literacy, religion and culture of the young Croatian state.