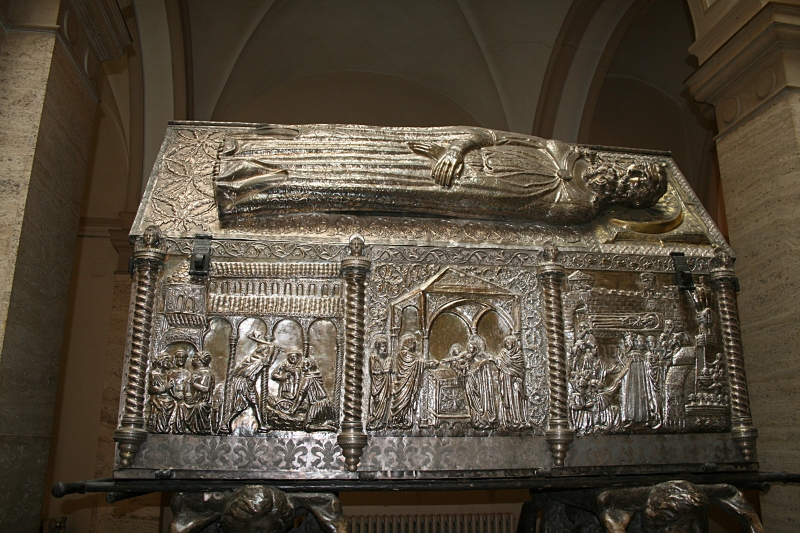 In the Church of St Simeon in Zadar, in a silver casket of immeasurable artistic value, there is a mummified body of Simeon the God-receiver (Šimun, Šime), a God-fearing old man and sage who held the child Jesus in his arms.

From the New Testament Gospel of Luke, we learn that Simeon the Elder, a man inspired by the Holy Spirit and one of those who were called prophets, came to the Jerusalem temple to take the Child of God in his arms and greet the one in him, who would bring salvation to all peoples. His body is kept in Zadar, the city whose patron saint is Saint Simeon, and the casket in which the body of the biblical God-receiver is preserved, is considered to be the most valuable work of Medieval goldsmith art in Croatia.

The casket has been officially declared a cultural monument of zero category, and by its artistic qualities and dimensions, it is also considered one of the most valuable Medieval works of art in Europe

Tradition says that the body of the Saint was first transferred from Palestine to Constantinople, where it stayed until the 13th century, and then in 1203 it was brought to Zadar. It is said that on that occasion, a Venetian nobleman, returning from a crusade in Syria, took the body of St Simeon the God-receiver with him, but his ship was caught by high winds and he was forced to sail into Zadar. The nobleman fell ill and died, so the body of the Saint remained in Zadar as the most precious relic. The relics of St Simeon are kept in a casket or chest of exceptional value, which was ordered by Elizabeth of Bosnia, the wife of one of the most powerful European rulers of the time, Louis the Great (Lodovicus, Nagy Lajos, Louis I, Ludwik). Elizabeth was the Queen of Hungary and Croatia and the daughter of the Bosnian Ban Stephen II Kotromanić (Stefan).

Elizabeth gave 250 kilogrammes of silver to a Milanese master who lived in Zadar to make the casket, and it displays historical events, everyday life of people from Zadar, their traditional garments, the appearance of certain parts of the city and the death scene of her father, Ban Stjepan II in the company of St Simeon.

The casket was made in 1380 from embossed silver sheet metal by the goldsmith Franciscus de Mediolano (of Milan), who had a workshop in Zadar, and was assisted in this art work by local craftsmen Petar Blažev from Rača, Stjepan Pribičev, Mihovil Damjanov and Andrija Markov from Zagreb. A writing in Latin is engraved on the back of the casket which reads in translation: Here, in this casket, which, to fulfil her vow, was donated by the powerful, glorious and exalted Elizabeth the Younger, ruler of Hungary, rests in peace Simeon the God-receiver, who held Jesus in his arms, born of a Virgin. This work was done by Franciscus de Mediolano in 1380.

The contract for the making of the casket was made on 5th July 1377, by which the master of Milan undertook to complete the work within one year, but the complex work extended to three full years. The casket with a double roof is made of cedar wood and completely lined with thick silver plates that are partially gilded. It is decorated with relief scenes using the embossing technique, and on the front, there are three separate scenes – the composition of the Apparitions in the Temple, monks who exhume the hidden body of the Saint and King Louis the Great who is entering Zadar. On the front, in high relief, is the body of the Saint in ceremonial attire; on the side you can see the scene of the ship rescued by Saint Simeon from the storm, while in the gable there is the coat of arms of Louis the Great. The side panel depicts Queen Elizabeth surrounded by the King and Croatian nobles, while on the inside of the lid there are three figurative compositions depicting the Saint’s miracles. In the middle of the back there is an embossed writing mentioning the patron, Queen Elizabeth and the year 1380, and the left scene displays Elizabeth of Bosnia with her three daughters handing over the completed casket to the Saint. The central scene shows a kneeling figure with a goldsmith’s tool, so it is assumed that it is a self-portrait of the master.

The body of the Saint, which is now in the casket, according to tradition or legend, was originally buried in the Zadar cemetery, near today’s parish Church of St John. It got there during the period of medical treatment of the sick Venetian knight at the hermits’ inn at the very end of the Zadar port, because initially, the Venetian did not tell anyone who he was, but he explained how his brother was buried. However, when his health deteriorated significantly, before his death he pointed out to the hermits the curiousness of the possessed document. The Zadar hermits found notes around his neck about the powers of Saint Simeon, so the Saint was exhumed, and since then the worship of the Saint God-receiver has begun in Zadar. In his honour, the Church of St Simeon was built, decorated with works of art and valuables. Zadar celebrates its patron Saint on 8th October, when the casket with the body of the Saint in St Simeon’s Church is opened for its citizens and visitors.