World Cravat Day was marked on Monday in Zagreb’s main square, with the ceremony involving the Cravat regiment guard and the regiment commander decorating the monument of Ban Josip... 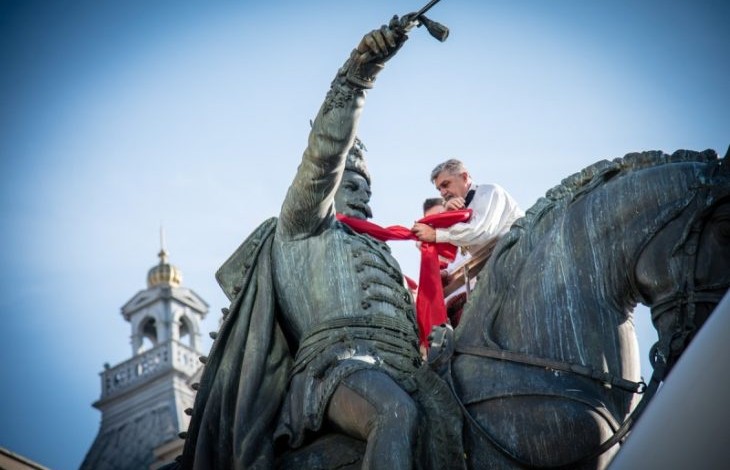 World Cravat Day was marked on Monday in Zagreb’s main square, with the ceremony involving the Cravat regiment guard and the regiment commander decorating the monument of Ban Josip Jelačić with a red necktie.

The ceremony,  was organised by the Academia Cravatica,  attracted a large audience of citizens.

The cravat regiment consists of 17 members including four cavalrymen who lined up in Zagreb’s main square in uniforms worn by Croatian soldiers during the Thirty Years’ War[.

Mihovil Bogoslav Matković, a representative of Academia Cravatica, an institution that promotes the cravat and its history and heritage, underscored that Cravat Day is marked with cravats being tied around 40 monuments in Zagreb as well as promotional activities in other cities around the country.

“The cravat as part of Croatia’s heritage is especially effective and can promote communication between Croatia and the world,” said Matković and recalled that it was at the Academia’s initiative in fact that the Croatian Sabor declared 18 October as Cravat Day.

“One thing that Croatia truly has, is the cravat, which is part of our heritage, however many people around the world know very little about that. This is a rare opportunity to brand our state in the world with something beautiful, useful and recognisable,” said the researcher.