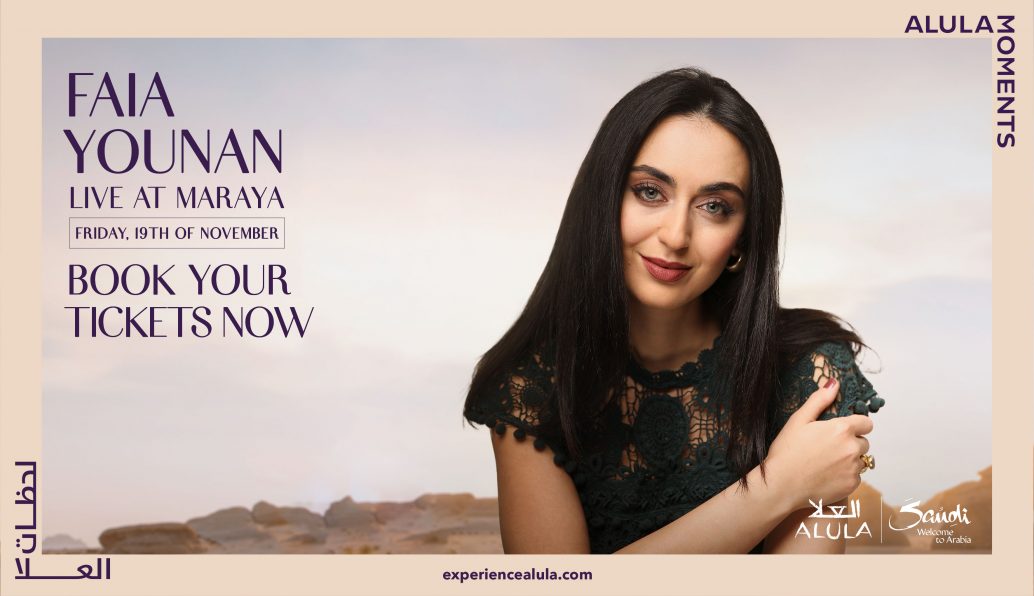 As part of the AlUla Moments events calendar, Maraya is hosting a performance by singer Faia Younan on 19 November.

Gifted with sentimental voice, the young singer thrills millions of Arabs across the world with her modern music, poem-songs and classical-oriental pieces; which all-together has helped Faia shape a unique musical identity among her counterparts.

Over the past six years Faia released two albums named “A Sea Between Us” and “Tales of The Heart”. The singer was first known for her music hit ‘To Our Countries’ which went viral on YouTube in 2014 and inspired the 21-year-old-at-that-time to pursue a professional career in music.

Faia is known for being a strong performer on stage and had previously carried out successful concerts at the Middle East’s most renowned theaters including The Damascus Opera House, The Cairo Opra House, and the famous Roman amphitheaters of Tunisia and Jordan.

Besides her presence in regional festivals and concerts, Faia Younan participates in internationals festivals in Sweden, UK, Netherlands, Denmark and Canada.

Her first trip to AlUla, Faia is excited to be performing at Maraya.

Faia commented, ‘I am excited to perform in such an amazing venue and in such a beautiful landscape as the Ashar Valley. I believe the music that we will be performing will be enhanced by the surrounds of the desert and location. I have heard so much about AlUla, I very much look forward to visiting.’

The live music concert will be orchestrated by songwriter and composer, Rayan Al Habre.

Those wanting to book tickets should sign up to be the first to hear when they are on sale at experiencealula.com