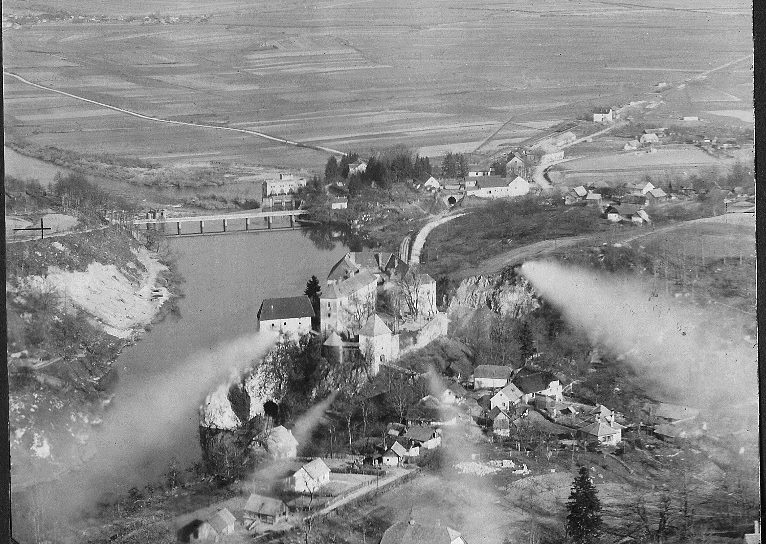 During World War II Ozalj was under a severe air attack by South African Air Forces (SAAF). Their pilots were supposed to provide aid to the anti-fascist forces, in this case, the Partisans, to reject the German occupier along with their supporters. The attack was carried out by the “16 squadron” and their command was to bomb the Old Town of Ozalj.

The report states that the two grenades hit the target and caused fire and smoke, which spread to other objects as well. Several aircraft were hit by the military on the ground, and the report also recommends new attacks, which after 22 March 1945 obviously did not repeat.

This is a collection of Beaufighter nose camera photographs obtained from 16 Squadron war diaries archived in Pretoria, as well as private collections of 16 squadron pilots.

You can also see a part of the relevant war diary pages:

“Beaufighters were briefed to attack enemy forces at Ozalj in Yugoslavia, and sweep in that area operating in two sections of four aircraft at intervals of one hour. The first four aircraft became airborn from base at 1325 and at 1458 commenced the attack on the target. There were no signs of concentrated troops or activity on the roads but 27 R.P. hits were scored on the village at RK 1570.

16 Squadron SAAF is an attack helicopter squadron of the South African Air Force that was formed at Germiston on 14 September 1939  and was operating in World War II until June 1945.