FROM PLITVICE TO THE WORLD The spirit of Skopje 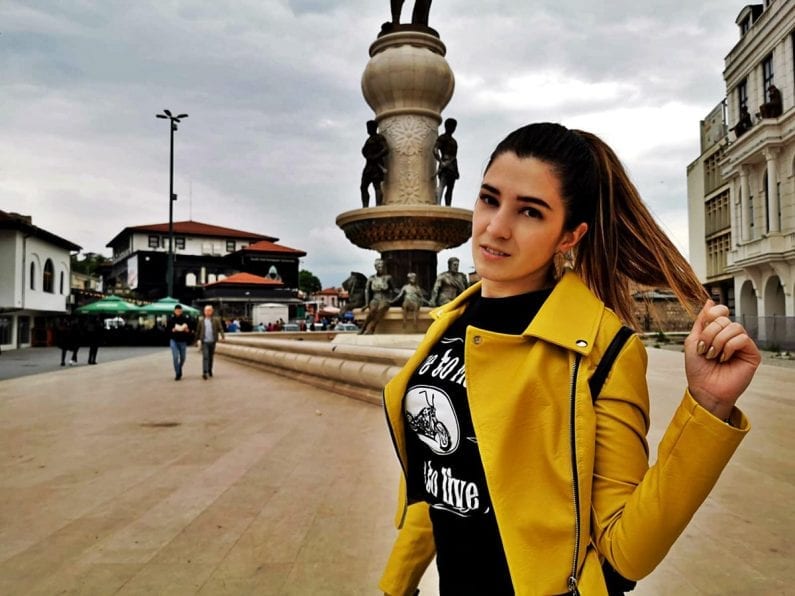 Every country gives you different feelings. To me, North Macedonia fit like Cinderella’s shoe. And there was only one perfect fit.

In April 2018 I visited for the first time. It was not a vacation so I did not have much time for exploring. However, I was blown away. The small things made the trip big. The week was spent in a town called Štip. It’s a small place and there isn’t much to do, but if you’re in good company there is no such thing as a bad place.

The most amazing part that absolutely impressed me were the sunrise and sunset. My hotel room was on the top floor and there was one whole wall made of glass.

Around 6 a.m. we would wake up and wait for the sun to rise. We also noticed a hill nearby and decided to climb it to see the sunset. I`ve been everywhere and seen many sunsets but the one in North Macedonia is the most beautiful. We spent the last night of the trip in Skopje. We didn’t have much time, but a local girl was with us so we tried to run around the city seeing the most important things.

The weather was sunny and hot, we laughed a lot and it was a city we visited for the first time. Therefore, I did not have any deeper thoughts and impressions which I usually have while exploring a country. The only thing I could have done is to plan another trip. Which I did.

This year I went again. The trip was differently planned and I already had an idea of what to do or where to go. I aimed for the details.

THE EARTHQUAKE THAT STOPPED TIME

Before I move on to my latest experience, I have to bring out some historical facts which are important to know before visiting. It made the whole trip a bit more meaningful.

Skopje got destroyed by an earthquake in 1963. Around 80% of the city was demolished in a 6.9, a thousand people died, a hundred thousand became homeless… The first reporter to come to the scene was from the New York Times. While landing, he saw the city from above. He said that it looked like it was bombed.

Many historical monuments got completely destroyed but the railway station stood strong and today it is a reminder of the hard times. There is a big clock on the wall that stopped at 05:17, at the exact moment when the tremors started. It still displays 05:17, 56 years later. It was obvious that recovery would take decades and a lot of help from all over the world. That is why Skopje is called „The City Of International Solidarity“. Dozens of countries worldwide sent aid. Many countries gathered and helped people stay strong. Today, streets around the city bear the names of the countries that provided aid as a display of appreciation and gratitude.

The city is still under reconstruction. The biggest architectural change and controversy was caused by the project called „Skopje 2014“, which is a rebuilding program taking place at this moment.

The aim of the project was to rebuild or reconstruct Skopje to make it look more appealing, nicer and safer. A lot of new buildings, monuments and other kinds of „decoration“ were built in a period of almost 10 years.

The estimated cost is between 80 and 500 million euro. It sounds very promising. However, there are lots of issues connected to the whole project. When speaking to local people, I have not heard even one word of support. Too many different architectural styles made the city grotesque, without authenticity and devastating for the spirit of Skopje. Many of them said that the money should have been invested in hospitals, education, salaries or other infrastructure that would actually help the inhabitants.

When speaking to tourists, they agree that the city is more appealing with more things to see. It is a bit funny to have so many styles even in a single street, not to mention the whole city. The city needed the update, but it ended up looking like a Picasso painting. Nevertheless, the situation is better now than it was ten years ago. I haven’t seen Skopje ten years ago, so I can only talk about it now. Although I do agree with both sides, when I have no choice but to accept what I get, I try to take the best out of it and use it in a positive way.

I did like the city. Instead of laughing at the lack of logic or making fun of the architectural ideas, I took photos of all the statues, enjoyed the great food, spent time with local people and admired the stunning sunset every day which no earthquake or building can change. I do not think that the spirit of Skopje is lost. It is just hiding and it is hard to notice it behind all the new buildings and statues. You can find it if you look in the right place.

I enjoyed every single thing about North Macedonia. During my two visits, I have seen Štip, Skopje and Tetovo. At this point, I have no other option but to plan another trip to visit the rest of the country. Most importantly, I am craving some Balkan food!