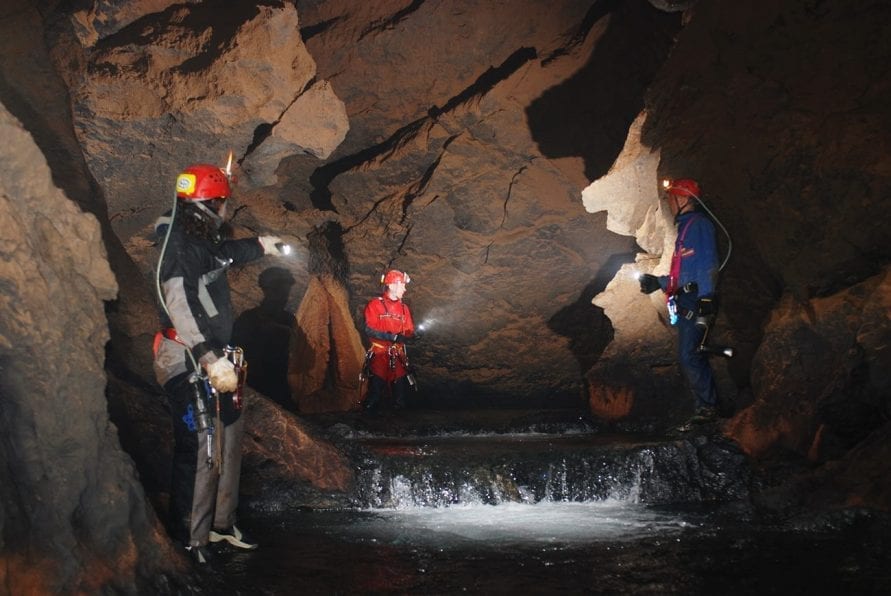 It is located near Jezerane, between Mala and Velika Kapela, and it has long piqued people’s interest. It is a pit cave whose entrance point is quite large – 22 x 12 metres. You can hear the thunderous rumble of water from the bottom, and the cave is famous for the legend of Rokača, an old woman who fell into the cave and died, which is likely where the pit cave’s name comes from.

Additionally, Rokina Bezdana is one of the locations with the greatest recorded amount of olm / proteus (Proteus anguinus) in a small area, and also the largest discovered colony of freshwater sponges in Croatia and in the world because the species is endemic to the Croatian karst. Forest engineer Tihomir Kovačević – Tihi is a speleologist and instructor of speleology, speleological diver, journalist, photographer and poet interested in speleology since childhood. He visited the Veternica cave as a scout way back in 1965 with his high school class.

Until today he has led 25 speleological and diving expeditions which contributed to the discovery of over ten speleological objects and sources in the Croatian karts more than 100 metres deep, three of which are over 200 metres deep. „Rokina bezdana is one of the most interesting speleological experiences for me. It’s an object that I’ve researched and still research. Situated between the two Kapela mountains, with a vertical entry of a hundred metres, strong water flow, waterfalls, lakes, dry canals, the Proteus… Rokina is really my obsession.“

Over the last twenty years, he has dived in Rokina Bezdana upstream four times, and the last dive was for the research and filming of a movie on the Proteus.

„We filmed some capital examples of the Proteus – over 30 centimetres long (the Postojna cave recorded proteus of „only“ 18 to 22 cm).  It is quite clear that we are likely talking about a different variety. That is realistic, as each speleological object is a different ecological unit, so life can develop in different, specific conditions. It is no wonder that we find different varieties of the same species in karts areas.“ In addition to surveying, the team has also achieved success in exploring the lower part of Rokina bezdana. They found around twenty metres of a new canal and a sump which lies in continuation of the entire object.

„In the lower area, we noticed a large number of freshwater sponge colonies which we assume is going to be another precious endemic gem of our karst. Of course, biospeleologist have to confirm this first. We also noticed a larger amount of proteus no larger than tenish centimetres, as opposed to those upstream in the lake past the entrance sump, those are almost gigantic in comparison… so we called this the proteus kindergarten.“

In further research and surveys, we used the „dry canal“. It is located some ten metres above the water flows and can be used as a base for rest and sleep (like in some previous dives), in order to keep the exploration continuous and the speleologists well rested. The Dry canal leads to two submerged pit caves which must be connected to the proteus kindergarten somewhere in the depths.

Tihomir and his team will carry on with this impressive, demanding and dangerous research of the location. We wholeheartedly recommend you go to YouTube and watch the film they recorded in Rokina which showcases all of the power and beauty of the largest subterranean river in Croatia.

Meanwhile, we hope that it will soon be far better recognised and definitely used more often for touristic purposes.

River route mystery solved
From 3 to 7 October 2002, dr. Mladen Kuhta and a team of speleologists from the Speleology Division of the Croatian Mountaineering Society Željezničar from Zagreb used paint to trace the route of the water rising in the deeps on Stajničko polje under the „Mala Kapela“ tunnel.

They were not surprised when the paint appeared two days later in the upper flow of Rokina Bezdana, thus confirming the theory that the waters rising on Stajničko polje pass through the pit cave. MSRE „Rakovica 2002“ was held the same year. While doing some additional shooting for the documentary film „The secret flow of the Korana river“, a team comprised of Alan Kovačević, Alan Stanković and Tihomir Kovačević, while passing through Slunj, was greatly surprised to notice a fluorescent green hue on the Slušnica.

First they thought that the Slušnica was being filmed from the air and its colour was enhanced for the shooting. The next surprise came a few hours later in the Korana canyon at Plitvice when they saw the same fluorescent green hue in the water flow near the Vila jezerkinja cave.

They concluded that the colour is likely flowed from the deeps at Stajničko polje through the canals of Rokina bezdana and appeared both at the source of the Slušnica (air distance of 31 kilometres) and somewhere at Plitvice above the Vila jezerkinja cave (air distance of 36.5 kilometres).

The water flows in the karst landscape are strange indeed…