STORM CHASING TEAM SENJ A storm chaser is born, not made 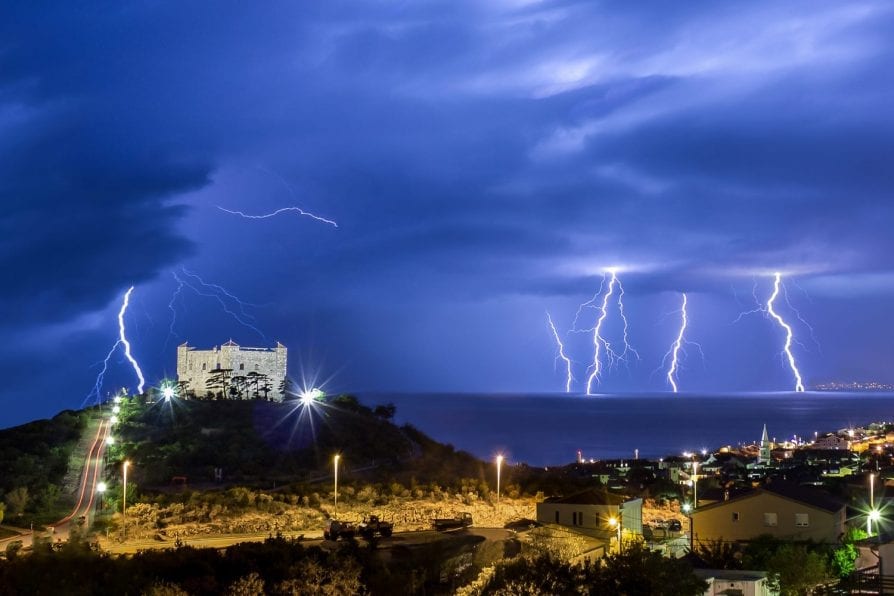 Have you ever heard of the term storm chaser and are you aware of the legendary Senj bora wind?

Seven brave men from Senj combined the two and formed the Storm Chasing Team Senj in 2013.

We talked to the team – Dinko Brozičević, Lucijan Španić, Nino Salkić, Karlo Uković, Mario Devčić, Marko Fero and Toni Popović – to learn everything about their activities, ventures, as well as Senj as the city of bora.

How did it all start and when did the first team form?

The Storm Chasing Team Senj was unofficially formed in 2013 as the culmination for the storm chasers working on the coasts of Croatia. We gathered as let’s say weather enthusiasts, primarily because of lightning photography, and after that this love grew into chasing all other weather conditions, and mostly the one Senj is famous for – our Senj bora.
In order to make our work more efficient and to get better at promoting Senj and the Senj bora, we decided to formalize our team and found the Storm Chasing Team Senj society in 2019. What exactly is the Senj bora and how is it different from other weather conditions?

The Senj bora is definitely a trademark of Senj. It’s our private wind, our citizen, we are born with it, live with it and die with it. Out of all weather conditions, it is different because of how unpredictable it is, it is an intense wind, cold during winter and dry during summer, and it has the „blow dryer“ effect.

What does it mean to be a storm chaser and what criteria does a person have to meet to join your team? Describe one of your „trips“ in detail. Before going out we follow weather forecasts, radars and other apps and models which either predict weather conditions or display them in real time. We agree on a location through a group we have on a social network, and sometimes, depending on weather conditions, we get out in fewer than five minutes after sharing information about the weather.

It can even happen that we go out several times in one night and go back home without any success. After going out in the field, we determine the direction of a cyclone and select filming locations based on it. After the chase we sort through the materials and publish them on our official Facebook page. What is the most dangerous situation you’ve found yourselves in? Have you ever had to save one of your team members?

The most dangerous situation was definitely what happened on 17 February 2016 when we were measuring wind speed up at Fort Nehaj, and a gust of wind of 200 kph lifted our friend Dinko and pushed him several meters away. We reacted quickly and brought him to a place sheltered from wind so luckily this incident passed without injury. Ever since then we prioritize safety, so when measuring hurricane gusts of bora we use safety belts and rope.

Over time your adventures have become more serious and more dangeours, and you’re also getting a lot of media coverage. What’s next, what are your planning?

We’re currently working on branding and promoting the Senj Bora, in collaboration with city institutions. In the meantime we’re buying and upgrading our wind measurement gear which will greatly help us in our future work. There are many plans for the future, but we’re taking it one step at a time. Don’t worry, you’ll be hearing about us more and more. What makes Senj special? Does Nehaj play an important role in your storm chasing activities?

Apart from being one of the oldest towns on the Adriatic and well known for its wind, Senj is recognizable by the legendary and never conquered Fort Nehaj – the symbol of Senj. Fort Nehaj plays an important role in our activities because of its position above town where the gusts of wind are the strongest.

How do you drink in the wind?

The idea of making the „Bora Caffé“ video comes from the gratitude we have for our loyal followers on social networks, but also as a humorous presentation of the bora wind in which members of our team show what living with this forceful wind is like. Having a drink in the wind is not easy, as can be seen from the video we published on Facebook. But anything is possible with a little willpower and humour! Does the bora wind have great touristic potential for Senj?

We believe that the bora at Fort Nehaj is a future city brand. Other than expanding the tourist offer, it can also be used for health, as a natural cure for asthma and the respiratory system.

Is it true that there is no flu in Senj?

We wouldn’t say that there’s no flu, but it is definitely not present as much as it is in the rest of Croatia. The Senj bora makes the air cleaner, makes breathing better, and we can also say that the bora makes Senj one of the sunniest places on the Adriatic, in addition to Hvar. The weather conditions in Senj have also made the architecture different. Can you explain this a bit?

As soon as you peek into the old city core you’ll notice narrow streets and small windows facing away from the wind with two sets of blinds – one which open to the outside and one which open to the inside. The roofs are flatter, and there are handlebars in some streets so people can hold onto something while walking.

How do tourists react when they feel the bora wind for the first time? What advice do you have for those who want to taste it, when should they come to Senj?

Anyone who feels the real bora wind for the first time is stunned by how special and powerful it is. Such a wind cannot be felt just anywhere, and many tourists come back to Senj because of it. Guests from all over the world have come to Senj because of the wind, there was even a film crew from Japan who were so fascinated by the wind they decided to film a documentary about it. They don’t get anything similar in Japan. The last documentary in collaboration with the Storm Chasing Team Senj was filmed by a crew from Austria. It will premiere in April on Senj City Day. There are songs about bora, tales about it, and more stories are yet to be written in the future.