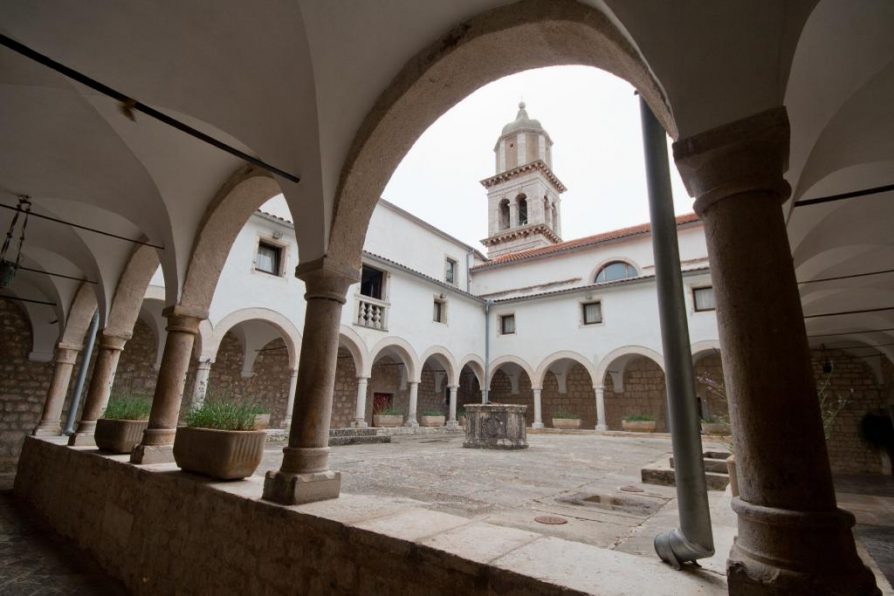 The Franciscan monastery complex is located just off the historical centre. As usual with monasteries, its original location was outside the city walls, but as the city grew the monastery complex became part of the city centre. The complex comprises several buildings: Saint Francis of Assisi’s church with an adjacent bell tower, two cloisters, dormitories, a refectory, and gardens with an olive grove. In the past, the monastic territory went all the way down to the sea shore. Today that terrain is occupied by a shipyard, but the remains of an old gate in the wall along the road bear witness to the formerly monastic land.

Closest to the road stands the 13th-century church dedicated to Saint Francis of Assisi and its 17th-century bell tower, one of the three bell towers in Cres. The bell tower boasts some distinctive stonework near the top: a set of stone heads placed on its four sides, representing the winds blowing from these directions. Their facial expressions symbolize the character of the respective winds: gentle facial expressions depict gentle winds, while the uglier facial expressions represent the more violent winds. The Gothic church of Saint Francis of Assisi is entered through a Renaissance portal topped by a shell-shaped lunette and the Franciscan coat of arms. Note the lovely woodcraft decorating the 15th-century choir stalls flanking the main altar.

Under each of the two cloisters lies a huge cistern called the šterna, a water tank, each topped by a well-curb that was used for pulling up buckets of water. The purpose of these cisterns is to harvest rainwater from rooftop catchments, which is an abundant source of water considering the ample roof surface of the monastery complex. The old cloister is the smaller one. Every summer, the new cloister – built in the 16th century and located adjacent to the church of Saint Francis of Assisi – turns into an open-air stage for music performances.

Adjacent to the new cloister is the monastery museum, home to a variety of religious artwork, silk liturgical vestments, and ceremonial objects. One of the very well preserved 15th- and 17th-century wooden sculptures that are kept at the monastery museum is the “Madonna and Child“, the only signed piece of wooden sculpture in the archipelago, crafted by Andrea da Murano around 1470. The museum also boasts one of the few remaining copies of the “Missale Romanum Glagolitice”, also known simply as the “Senj Missal” (Croatian: „Misal po zakonu rimskoga Dvora”, or the „Senjski misal”), an incunabulum printed in 1494 at the Glagolitic printing house in Senj. This was the first time in Europe a book was printed neither in the Latin language nor in Roman script: instead, it was written in a Croatian version of the Church Slavonic and printed in Glagolitic script. Only three copies of the missal have survived and they are kept at Budapest, Sankt Peterburg, and Cres.

As for the dormitories, one wing is used by the friars, while the other contains rooms for rent.