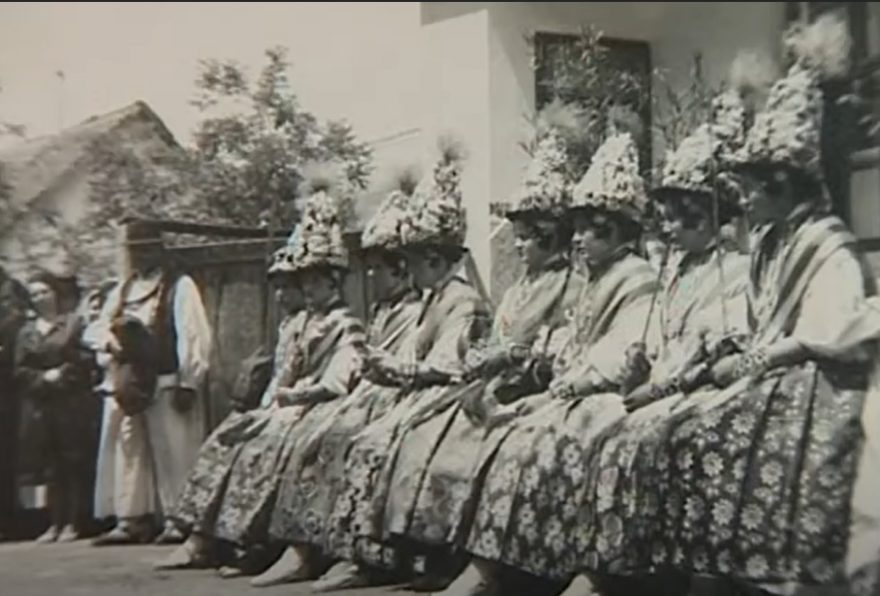 Every year on Whitsunday the Spring Procession of kraljice (queens) or ljelje from Gorjani takes place in Gorjani near Đakovo, a protected intangible heritage inscribed on UNESCO’s Representative List of the Intangible Cultural Heritage of Humanity.

The village Gorjani was invaded during the Turkish invasion. According to the legend, the Turks captured all the men in the village, whose wives put on colourful clothes and men’s hats decorated with artificial flowers, armed themselves with sickles and scythes and made their way to the Turkish camp. The Turks thought them to be ghosts, got frightened and fled. That is how the wives of the Gorjani village freed their husbands, fathers and brothers. They have been dressing up in such a fashion ever since on Whitsunday to commemorate that event. That custom has been preserved in its original form up until today. The only modification being that the costumed young women nowadays hold sabres instead of sickles and scythes.

The spring procession of Ljelje is held on Whitsunday. The young women used to gather at the house of one of the participants in the afternoon. Upon gathering, they began the procession through the village and visit all the homes whose doors were open. They would sing and dance there and their hosts would give them presents. Recently, there were some minor modifications to the procession. In the past few years, since the custom was revived, Ljelje attend the mass on Whitsunday, whereupon they perform a circle dance accompanied by the music of tambura players. They start their procession through the village in the church’s courtyard. They visit the homes of people who expressed the wish to be visited by Ljelje.

During the procession, all the young women are equally festively dressed in colourful silk garments, the costume of Ljelje. They are ranked by the place they occupy and distinguished by the sabres and floral hats either as kraljevi (kings) or kraljice (queens) who wear white head wreaths.

This custom was spread throughout Slavonia, Syrmia and Baranja. It began to disappear by the end of the 19thcentury. It was preserved in its original form in Gorjani until today, with a discontinuation from 1956 to 2005. In 2009 the spring procession of Ljelje in Gorjani was declared an intangible heritage item and is protected under UNESCO, the Arts and Culture Association “Gorjanac” from Gorjani attained the rights to the event and is in charge of its preservation.