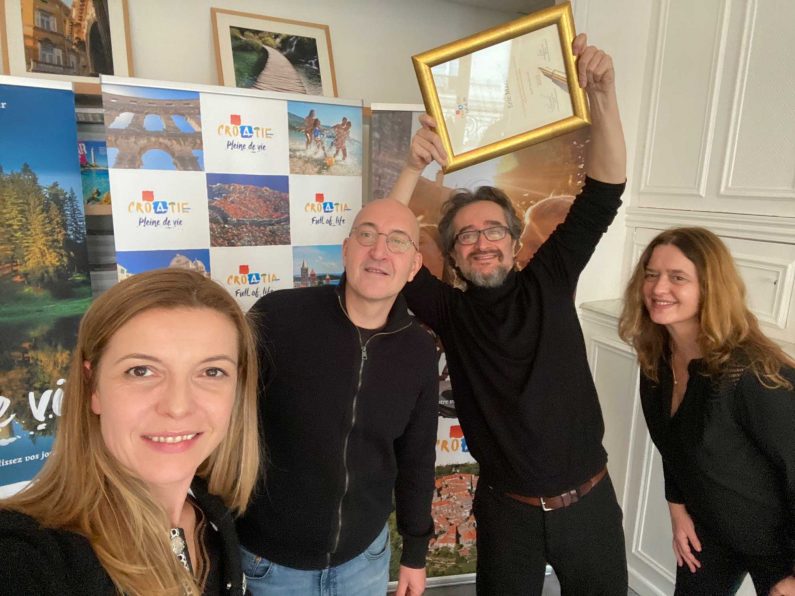 This year, the Croatian National Tourist Board awarded journalists and recognized the best foreign media coverage of Croatia in 2019 as part of the 16th edition of the “Golden Pen”.

“This year’s Golden Pen Award Ceremony, which was supposed to bring together over 50 foreign journalists, editors-in-chief, influencers and bloggers, was supposed to be held this past spring in Istria. Due to the epidemiological situation in Croatia, as in Europe and the world, we unfortunately did not manage to organize a live award ceremony, but wanting to keep the tradition and continuity of this long-standing award, which has been well received among foreign media, we delivered their well-deserved awards and recognitions through our network of global Representative offices, said the Director of the Croatian National Tourist Board Kristjan Staničić, adding that in this way we once again drew the attention of foreign media to Croatia as the leading tourist destination in the Mediterranean.

The “Golden Pen” Award has been awarded since 2005 with the aim of emphasizing the value of professional media coverage featuring Croatia and Croatian tourism. The most significant award is the Grand Prix, which was awarded in three categories, i.e. for the best print or online text, for the best electronic media coverage (television, radio) and for the best blog post (bloggers, influencers) in 2019.

“Tourist stories and impressions based on personal experience are the best recommendation, but also an invitation to discover the beauty of Croatia, to all who have not yet visited our beautiful Homeland. Congratulations to all the winners of the Golden Pen and thank you for promoting the value of Croatia’s tourism across international markets. In these challenging times, your professional work is an additional contribution to promoting Croatia as a high-quality and safe destination for unforgettable experiences and breathtaking scenery, “said Minister of Tourism and Sport Nikolina Brnjac.

This year’s winner of the Grand Prix for the best print media text in 2019 is Alex Crevar from the USA, who published an article “36 Hours in Rijeka” in the New York Times. Alex Crevar is a respected journalist, writer and editor who has been reporting about travel for more than 20 years as a regular contributor to publications such as the New York Times, National Geographic Travel and Lonely Planet magazine. Since his first visit to our country in 1998, he has written at least 100 articles about Croatia.

His article for the New York Times was published in October 2019 across five pages of print, and together with the online publication it was seen by more than 46 million readers, which surely contributed to the strong promotion of Rijeka as the European Capital of Culture for 2020.

The winners of the Grand Prix for the best electronic media report in 2019 are Vladimír Kouba and Michal Hula, who filmed and aired “Truffles – jewels of Istrian gastronomy” for Czech TV NOVA. The editor-in-chief of the foreign newsroom on TV Nova, the largest and most watched television in the Czech Republic, Vladimír Kouba and cameraman Michal Hula filmed in Croatia in 2019 describing truffle hunting as presented by the Karlić family and emphasizing the importance of truffles for Istria and its hospitality and cuisine offer.

They also visited the famous Zigante Truffle Festival, which attracts many Croatian visitors, foreign tourists and gourmets every year. The show was watched by 1.2 million viewers in the favourite Czech show Vikend.

The award for the best blog post in 2019 was won by the Swedes Klas Daniel Alexander Waltner and Christine Eva Louise Wedberg for their blog “Swedishnomad”, which has more than 17 thousand visitors a day and more than six million visitors a year. It is a highly respectable blog that publishes structured, informative and detailed blog posts about different destinations. This duo gladly visits Croatia and in their posts every time they discover something new and encourage their readers to travel to Croatia.

“With this year’s symbolic award ceremony, we wanted to thank the foreign media for their professional reporting on Croatian tourism and contribution to the promotion and positioning of Croatia as a quality and attractive tourist destination across international markets. Positive media coverage, which are the result of their own experience and stay in our country, have a special significance in creating a positive image of Croatian tourism”, concluded Staničić, adding that, in addition to awards for the main Grand Prix winners, all nominated media received special recognition certificates and thank you letters.