Zach got on one knee, and Julie said YES! 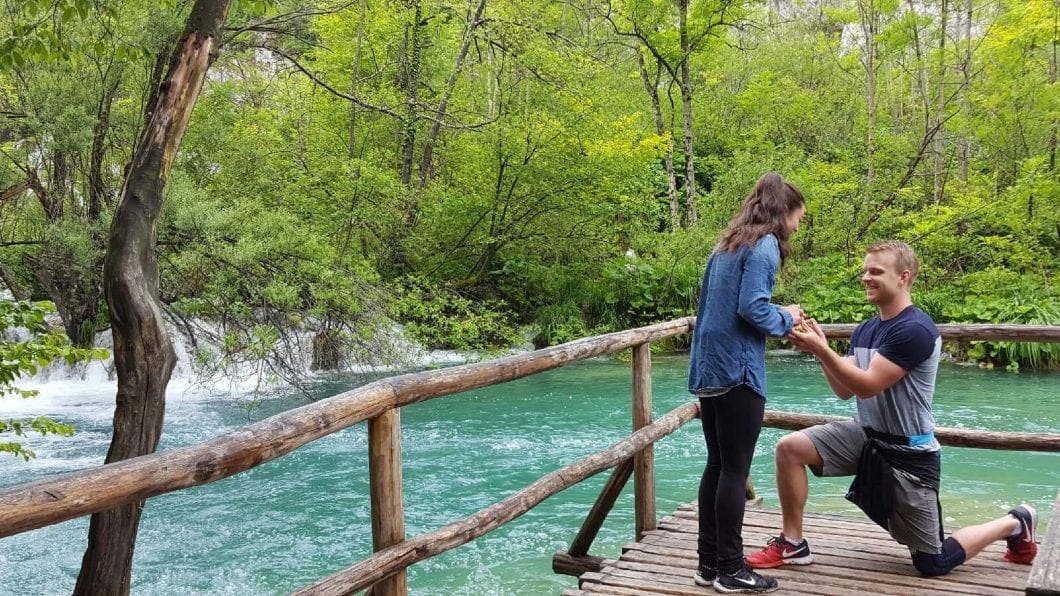 Julie and Zach, a beautiful couple from USA were doing a three week European vacation in England, Hungary, Croatia, and Italy.  Romantic Zach had a special plan for their visit to Plitvice Lakes, so we decided to do an interview with both of them, and find out more about their romantic engagement story.

So Zach, how it all started?

I had asked Julie’s Dad for his blessing while we were in Zagreb, right before we left for Plitvice. Once we were engaged, we had to keep it a secret for the remaining 1.5 weeks left of the trip to tell anyone so we could tell Zach’s family when we got home! We always had to take two pictures in every location, one with the ring and one without! How did you choose Plitvice Lakes as a location for the proposal?

I knew I wanted to propose in Croatia, we were so excited to explore Plitvice and the coast in Trogir and Dubrovnik. At first I was planning on proposing at the Blue Lagoon in Trogir, but once we got to Plitvice I knew that I found the perfect location. The backdrop of crystal clear waterfalls and Croatian countryside made for a perfect location. So what was the plan, how did you organize everything?
I had bought a ring box in Budapest that was decorated like a sea turtle (Julie’s favorite animal) and I had the ring inside. The box was in a sock in my suitcase for most of the trip, but I brought it along for the Plitvice hike. Around noon, we climbed down through a cave and emerged at a gorgeous part of the park where no one else was around. Julie was up ahead, so I told her brother to start filming. I went up, got down on one knee, pulled out the turtle, and popped the question! Luckily she said yes! Was this the first visit for both of you?
Yes it was, and it sure didn’t disappoint. We were city hopping through Europe for three weeks and Plitvice was our favorite stop by far!

Julie, did you had any idea what he was about to do?
Before we left for the trip I thought this was the perfect trip for a proposal. My entire family was along, it was our first trip to Europe together and I knew he wouldn’t have another opportunity like this in a long time. So I was hoping for a proposal, but I didn’t have any idea if it was actually going to happen, or where it would happen. He really threw me off when he asked me what I wanted my engagement ring to look like the day before he proposed. After that I threw the entire thought of a proposal out the window. The next day, he popped the question! And got the ring spot on!! Was it as romantic as you thought it would be?
It blew all of my expectations out of the water. I was so surprised and excited and he picked the perfect location where we were on a dock in the middle of the crystal blue water surrounded by waterfalls. We even had the entire dock by ourselves. We went back to that location later that day to get more pictures and the dock was filled with people. It was very romantic having just us surrounded by my family.

Will you return in the future, as a married couple?
Definitely!!! We hope to be able to take our kids there someday and show them the exact spot Dad proposed to Mom. Julie and Zach are always in a search for new adventures and special moments so be sure to follow them on their super interesting Instagram: Ruhls Of The Road and website.