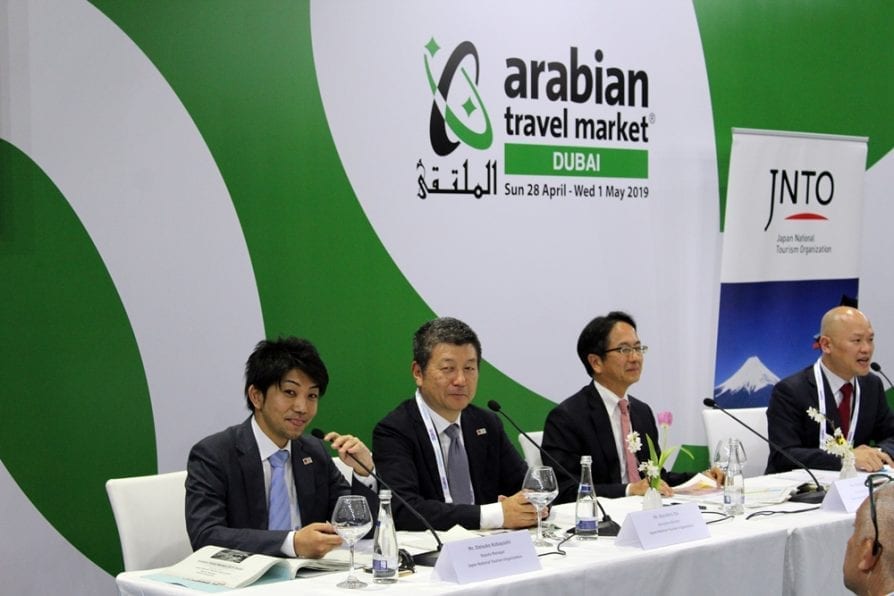 Japan National Tourism Organization to promote luxury, authenticity and seasons – with cherry blossoms decorating its stand – at this year’s show

DUBAI (April 28) Japan National Tourism Organization (JNTO) will be making a colorful impression at Arabian Travel Market 2019 this week as it looks to build on the 31 million visitors it welcomed in 2018, an 8.7 percent increase year-on-year.

JNTO’s stand will be decked in real cherry blossoms to highlight its Spring colors and year-round seasonal appeal while luxury and authenticity are other key promotional messages. Sport is set to be another major inbound magnet with the Rugby World Cup coming up later this year and Tokyo hosting the 2020 Olympic Games – meaning the Japanese government is in buoyant mood, targeting 40 million visitors next year.

Executive Vice President Tsutomu Shimura said while the majority of its visitors are from neighboring Asian countries (24.34 million), it is keen to attract more affluent, long-haul visitors. JNTO has a strong global presence through its 21 overseas offices.

“The market research we conducted last year shows the Middle East, especially the UAE, is a potential lucrative market with positive impressions of Japan,” he said. “We have identified the Middle East market as an important market for travellers seeking unique luxury experiences and will use the ATM to spearhead a great number of promotional activities in the region.”

From traditional culture with 18 UNESCO World Heritage sites to modern pop culture including manga and anime, Japan – ranked fourth in the world for travel and tourism competitiveness – is the perfect holiday destination for anyone looking for authentic travel experiences among its 126 million population.

Japanese cuisine, shopping, hot springs, sightseeing and theme parks are the principal attractions for leisure visitors – and accommodation options across its eight regions and 47 prefectures are broad, from major five-star brands to ryokans (Japanese-style inns).

Inbound visitor drivers include relaxation of visa requirements, expansion of tax-free program and faster immigration procedures, along with growth in flight and cruise networks and rise of middle and high-income classes in Asia.

The Japan Official Travel App is available in four languages and optimised for smartphones and Instagrammers can follow the country on #visitjapanjp and #unknownjapan.