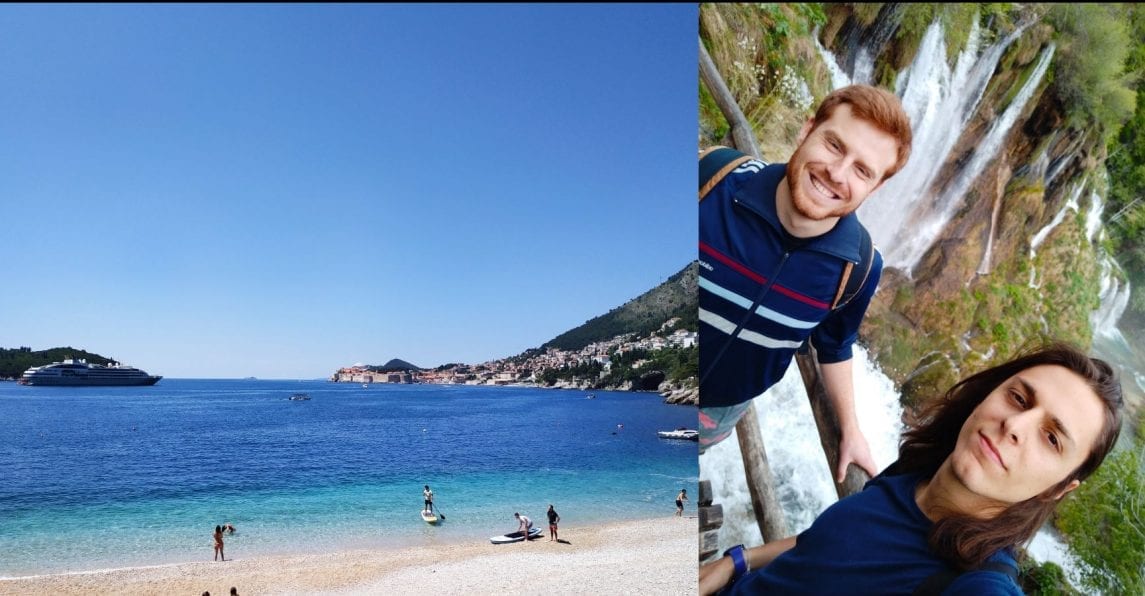 Mike and Nikos, from a Greece city Kalamata are a kind of friends that are always in a search for new adventures.
They are both in very demanding lines of business; Nikos is a consultant and Mike a medical doctor, so they wanted to blow off some steam and find a nice place, close to the sea, which on the other side wouldn’t be insanely touristic or too mainstream. On top of that, they wanted (and needed) a bit of adventure on the planned trip.

As they just had 10 days at disposal, they decided to stay in Europe, but they had already been in most of the common summer destinations.

“Truth is, there is an ever-growing hype about Croatia and we wanted to check it out for ourselves, so we decided for a 10-day road trip from the North (Zagreb) to the South (Dubrovnik) in early May, just before the high season booms.” Let`s talk about the dragons. Was the TV show important for choosing Croatia as a travel destination, and how did you like the real King`s Landing?

I am going to be honest here. Although we are both fans of the series, I can’t really say we are fanboys or anything, so that we have come just for that. Croatia is a country with a long history, amazing landscapes, interesting people and various beautiful places to visit, so it would be an understatement to say that we are here because of Game of Thrones.

It was for sure fascinating to be in Dubrovnik the exact day that the episode with the destruction of King’s Landing was aired, although it made our avoiding the spoilers on social media or by overhearing stuff that was said on the street even more difficult. We managed to see this episode only after we came back home. I think our friends who watched the episode right away and knew that we were there were more excited about it. So, the ‘real King’s Landing’ aka Dubrovnik is simply put a marvellous city. Huge old stone walls of astonishing beauty hugging the city, preventing the intruders of history of impregnating it, gorgeous beaches, amazing landscapes (don’t miss going to the top of the hill of Fort Imperial) and a vivid nightlife.

The only downside was the fact that it is unreasonably expensive in comparison to other cities in Croatia.

You travelled all over Croatia, what did you like the most?

That’s difficult to answer but I think the place I liked the most in Croatia with a slight difference from the rest was the city of Split, which combines natural beauty and vivid life, while not being insanely touristic and expensive.

I particularly enjoyed the Marjan Forest Park and the amazing view over the city from up there, as well as strolling down the narrow streets of the historical centre, which is protected and preserved by UNESCO. For one reason or another, Croatia has the name of a destination for lovers, where people go to have romantic holidays. I can’t say it’s not romantic, as it provides an abundance of amazing views and viewpoints, where you catch yourself just staring in awe, but it is also a place where you can go with friends, do activities, meet new people and party apart from just chilling.

One of the stops was Plitvice Lakes.

The Plitvice Lakes were most certainly one of the highlights of the trip. It is the place to be if you like hiking along crystal clear lakes and amazing waterfalls. All in all, it’s a fantastic site that’s definitely worth a visit if you find yourself in Croatia, but make sure you have got enough time. Because of bad weather we had to squeeze our visit one day before than planned and were there ‘only’ for 5 hours. Would have gladly passed more than 10 roaming around if I had the chance. You were driving around the country by car, is Croatia a good place for a road trip?

Croatia has very good roads, well-structured national arteries and decent toll prices. Croatians as drivers are in average respectful to other drivers and pedestrians and we didn’t encounter any problem. The price for hiring a car was also absolutely reasonable (we got it from Zagreb, can’t promise the same about Dubrovnik).

1. Visit Plitvice Lakes
2. Hike to the top of Vidova Gora on the island of Brač
3. Spend a few hours doing Zip-Line on the mountains over Omiš
4. Drink a beer (or two) in the café Vidilica in Split, just at the beginning of the park and enjoy the view
5. Chill out on the Sveti Jakov Beach in Dubrovnik Will you come back?

No question about it. Croatia is a country with so many things to do and see that you can’t –just can’t- manage everything in the first round. It takes multiple visits to be able to immerse yourself in the culture and to make sure you have tasted at least a bit of everything this beautiful country has to offer.