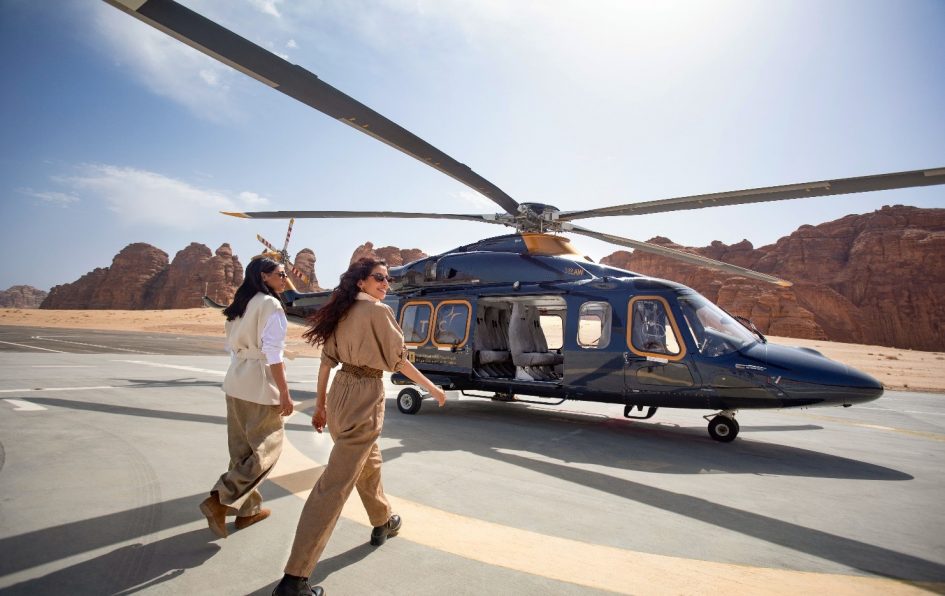 The unique landscape of AlUla showcases three distinct geological periods going back up to a thousand million years. While archaeologists and geologists have the opportunity to fly over AlUla as part of their work to understand and document this history, visitors to AlUla can also now appreciate the diversity, monumentality and global significance of the landscape by taking the Kingdom’s first helicopter tours.

Don Boyer, a geologist who was among the first to undertake research-based flights says visitors should expect to be ‘blown-away’ as he was the first time he took to the air.

‘While the rocks are mostly common rock types, the fact that you have these three completely different landscapes – the Precambrian Arabian shield rocks, the sandstone that was laid down over it and then the black basalt formed by volcanic eruptions – all in the one area, is what makes AlUla so special,’ said Boyer.

‘The weathering, the agencies of wind and water, have created drainages, such as the wadi that cuts through AlUla and the steep walled canyons nearby. These elements have sculpted the ridge-tops and created dramatic rough edges of basalt and interesting rock formations. Then you have the variety of colours and textures from the black basalt to the multi-layered sandstone. It’s an extraordinary geological journey that takes your breath away; it almost brings you to tears at times.’

Tens of thousands of archaeological sites have been identified in AlUla and very few of them have been closely investigated to date. The span of time that the archaeology covers is at least 7,000 years –including the Dadan period and the Nabataean period.

Boyer says it is clear that there was a lot going on even in the remote desert areas, which he says is remarkable given the apparent lack of evidence of settlements where these people might have lived.

‘The landscape we see today is more or less the same landscape those guys saw 7,000 years ago. The pleasure of flying over this part of Arabia as opposed to for example heritage sites in Europe is that there is no clutter. In AlUla, it’s vast, you see things in their raw state and the state of preservation is generally very good indeed,’ said Boyer.

The helicopter flights are available at 750 SAR per person and will operate twice a day. The 30 minute flight will take in seven major sites of significance including the monumental Jabal AlFil (Elephant Rock) AlUla’s most famous natural geological rock formation; Hegra, a UNESCO World Heritage Site and the southern capital of the Nabataean civilisation; The Hijaz Railway and the modern-day marvel of Maraya, the world’s largest mirrored building shining brightly like a diamond in the desert.

The tour will also take in Jabal Ikmah (the open-air library) and Dadan, the capital of the Dadan and Lihyan kingdoms as well as AlUla Old Town, the 12th-century medieval city, before landing back at Fursan Village.

Don Boyer feels sure that anyone who can have the opportunity to see AlUla from the air won’t be disappointed.