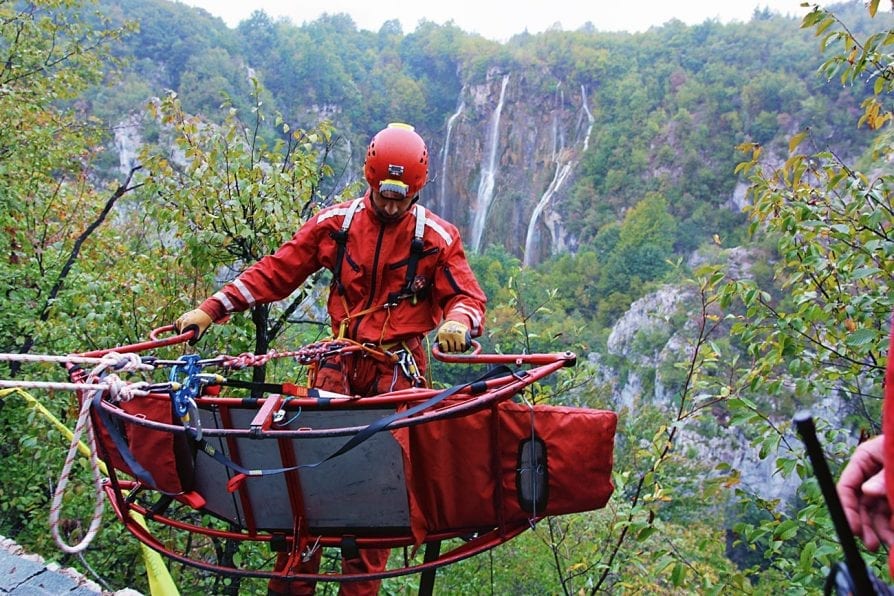 Due to such tourist arrival frequency, the risk of accidents and space disorientation grows, causing an increase in HGSS interventions number.

HGSS Gospić has acknowledged Plitvice Lakes area as a security risk and started making a tourist mountaineering map under the HGSS programme “Cartography”, with the aim of preventing accidents, increasing safety of moving and staying in nature and promoting natural, cultural and sport/recreational values of the said area.

The choice of destination is a result of the fact that under HGSS Gospić’s control (intervention-wise) is the total area of Lika-Senj County, and NP Plitvice Lakes belongs to it for the most part of its territory (90,8%), meaning that in case of an accident or a missing person, HGSS Gospić members go on the field.

With credible and up-to-date themed tourist mountaineering maps and guides, HGSS tries to act preventively by giving clear and purposeful information about the territory to mountaineers, tourist and other recreational visitors who plan to visit and conduct other activities.

These maps are also useful to HGSS members giving them a faster, safer and more efficient access to people in danger during rescue missions and searches.

Having in mind that a map should be adjusted to an average user, clear and intuitive, and as up-to-date and credible as possible, project author of NP Plitvice Lakes tourist mountaineering map, Nikola Šimunić, Ph.D., started working on this map with the aim of giving potential users as many useful and relevant information about the NP.

The map is entirely made in GIS system which guarantees precision in 1:25000 scale, meaning that 1 cm on the map corresponds to 250 m in nature. This map is a part of HGSS’ map series called “Dinaric Alps”. Main layer of the map is the GIS base of spatial data containing information about hypsometry (contour lines), forest surfaces, hydrological network, roads, trails (hiking, biking etc.), buildings and other objects such as caves, springs, ruins etc.

After making the GIS base, author and colleagues from HGSS Gospić inspected the field and collected information, with GPS devices, about trails and objects that would be interesting to include on the map. With all data in one place, the next step was to start graphic design and review the map. It was made in HTRS96/TM coordinate system, the official projection coordinate system of Croatia. Since HGSS Gospić members use HTRS96/TM coordinate system on official GPS devices, making the map in this system will enable even easier spatial positioning in the stated area.

That area has a surface of 684,7 km2, and covers mostly rural and, at places, hard accessible territories of Vrhovine, Rakovica, Saborsko and Plitvice (Korenica) areas. It is the contact area of Lika subregions Krbava and Gacka and Plaški-Saborsko territory (Potkapelska zavala).

The author believes that the map will find its place in the backpack of every active nature lover who gets the chance to visit this destination and enjoy its beauties.