THE NOSE-HORNED VIPER A famous, but misunderstood resident of Croatia 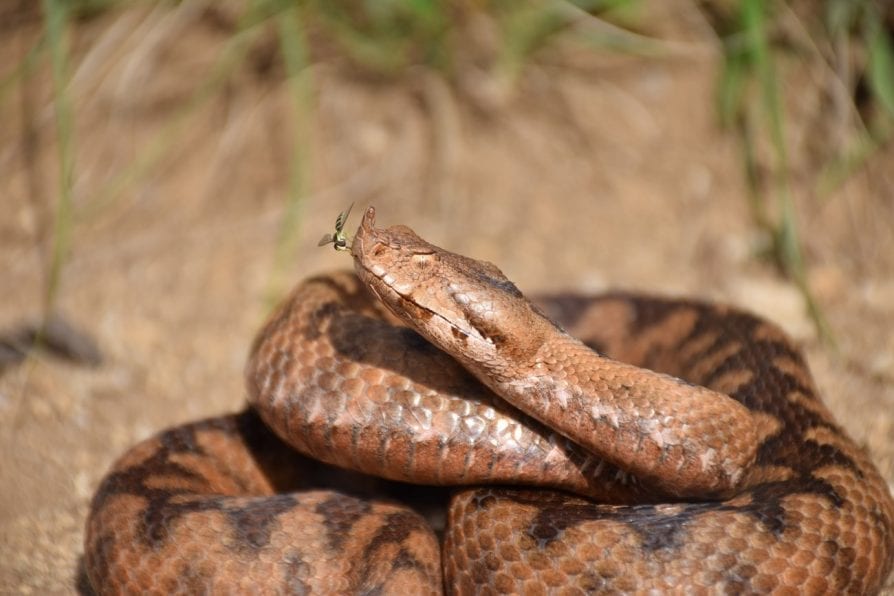 A story by experts in snakes and other reptiles – Mladen Zadravec, Roman Cesarec and Katarina Terlević.

In Spring flowers bloom and many animals, awoken from their Winter slumber, become active. Among them is our little scaly friend.

The nose-horned viper, Vipera ammodytes (Linnaeus, 1758) [in Croatian: poskok], is the largest member of the viper family present in Croatia. On average, it can attain a length between 60 and 80 cm, (very) rarely more, despite what you can hear in the media. The ground colouration of the body varies from light grey to dark brown. Greenish, yellowish, pinkish and reddish hues may be present, while it is possible for a specimen to be completely reddish, orange, whitish-grey and, extremely rarely, completely black.

Along the back is a characteristic zig-zag pattern, which is almost as variable as the ground colouration. It serves as both camouflage and a warning to potential predators.

Atop the snout is another distinguishing feature of this species – a soft, scale-covered horn. What is its purpose? No one knows! This species lives on suitable dry and warm, preferably rocky, habitats almost all over Croatia – most notably in the Mediterranean part of the country, but also in the interior, like Lika, Hrvatsko Zagorje, and Kalnik, but it is missing in Slavonia, Podravina, Baranja and the hills around Požega.

High altitudes are not a problem – it can be found from sea level to the highest peaks of Dinara and Velebit. The nose-horned viper feeds on small mammals like mice or rats, and they play a vital role in the population control of those species.

It also feeds on lizards, birds, and even other snakes. It is strictly protected by law in Croatia – it is illegal to catch, hurt, kill, keep, sell, destroy its habitat etc.! Our little scaly friend is literally the stuff of legends, with intricate folklore weaved around it. The tale pertaining to its Croatian name, “poskok” (literally “skip”, “jump”), refers to the myth that this species can jump, as much as several metres, and inflict a deadly bite.

Of course, it cannot jump. But it is venomous, therefore if you do encounter one it is best to simply leave it alone – it’s NOT out to get you, but it will defend itself if you leave it no other option! Simply keep a safe distance (roughly the length of the snake is fine, one to two metres is more than enough) and wait for the snake to move off on its own, or simply pass calmly by it maintaining the safe distance.

You could snap a picture or two, to show your friends and family… and it would certainly be nice to share your find with us! In case of a bite, various side effects may occur, rarely even death. If a bite occurs, proper first aid should be applied.

Antivenom should never be administered outside the hospital! In most instances, it isn’t needed, anyway. In any case, you should never panic!

Currently, the team made from experts – Mladen Zadravec, Roman Cesarec and Katarina Terlević is working on three separate populations – one on a hot Mediterranean island at sea level, one in Lika at about 1000 m a.s.l., and a suburban one in north-western Croatia at about 300-400 m a.s.l.

As well as gathering much needed data for the conservation of this species, they’re curious to find out how they adapted to living in such different environments.

You photographed a snake somewhere in Croatia? You don’t know which species it is? You want to share your finding?

Feel free to send your findings to zh@zadweb.biz.hr! Whatever you send there will also be included into the publicly available Biologer.hr database, maintained by Association Hyla. Records for other reptiles and amphibians found in Croatia are also accepted. Check out biologer.hr for more details.