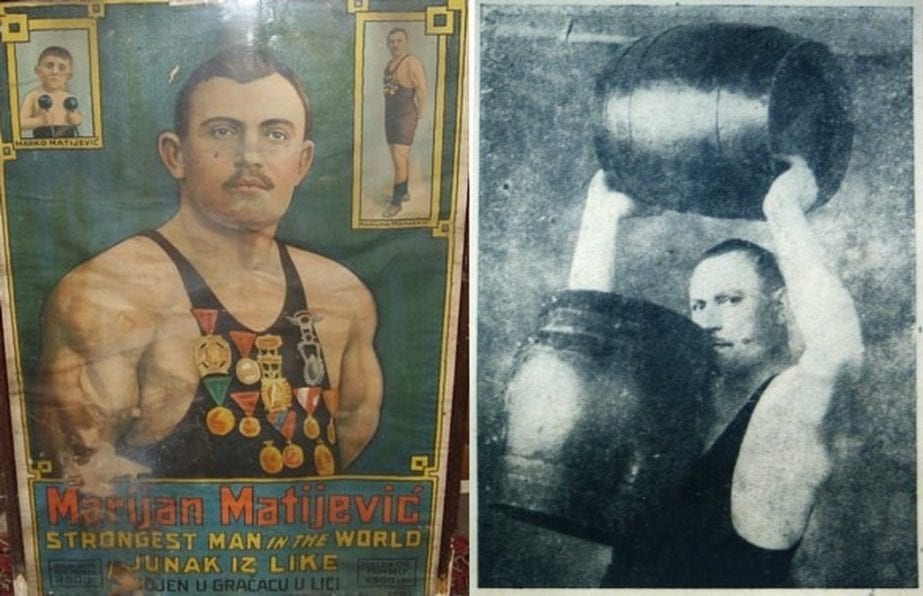 In his native Lika Marijan became a legend in his lifetime, because of its strength, goodness and patriotism. His nicknames were Lički Samson, the hero from Lika, Man Bear Hercules and the golden heart.

Born into a poor family and being one of six children he learned quickly and from a young age helped his parents on the farm, mainly doing physical labour. As he grew up he started working on the railroad for some time and when he was 19 he moved to Berlin, Germany.

One-day Marijan read a newspaper article about a circus in town and that a champion wrestler is looking for challengers for a wrestling match. The reward was 500 gold mark. Marijan took part in the challenge and a legend was born. Marijan entered the ring, lifted his opponent and slammed him to the floor. The champion was no match for Marijan and he became an instant success in 1900. He joined the circus and travelled the globe as a strong man.

Soon the circus ended up in Canada and he went off to start his solo career. In North America, Matijević became an expert in Greco-Roman wrestling. Participating in an exhibition match he defeated the Italian boxing champion Primo Carneri – he threw him easily over the ropes into the audience.

As he became more famous he was invited to participate in the wrestling world championship held in Istanbul Turkey in 1904. He won without any problems and was awarded the Great star of Turkey made of gold and silver. The award was given to him personally by the last Ottoman sultan Abdul Hamid II.

Marijan continued to demonstrate his strength by bending iron rods, lifting heavy barrels with his teeth and getting 150 kg rocks broken on his chest.

Two of his shows made him famous in the USA – first when he pulled two cargo ships with his hands through New York harbour and the second event was when he prevented a plane from taking off. The plane was tied to a rope and Marjan held the plane on the ground with his strength. More and more people started to attend his show and the Athletes` Commission awarded him the title “World`s Strongest Man”.

He continued to travel the world and attended a wrestling exhibition match in Rijeka Croatia during 1907 where he wrestled against a few Italian champions, defeating them all. The Italian audience did not really approve of a Croatian defeating Italians and a mob started attacking Matijević. He was badly injured, received knife wounds and his right arm was broken.

After the match, he was taken to Budapest to receive treatment and spent 8 months recovering there. In 1914 Marijan married Irena Kohn and had 11 children. He continued shocking the world visiting North America, Europe and even China. During one show the announcer introduced him as the strongest Austrian, so he came out on stage and corrected him saying:

“Dear ladies and gentleman, I am not Austrian. I am Croatian born in sturdy and proud Lika, at the foot of Velebit mountain where wolfs howl, foxes bark, and grasshoppers eat away the wheat. Where the rust shines and heroes are born… “

His strength was still a mystery, so after a show in Chicago doctors x-rayed him and discovered that his bones were double stacked making him stronger. Legend says that he would eat like 10 men, eating 5 kg of meat for lunch and on a hard day even a whole roasted lamb.

Matijević was a generous man helping and giving away all his money and awards to the needy. He helped his homeland and its people by selling off his gold medals and giving large amounts of money to the red cross.

On the 12th of April 1927 Marijan visited his countryman Nikola Tesla in New York. Both Marijan Matijevic and Nikola Tesla came from the region of Lika in Croatia. On this visit Marijan performed some shows where he demonstrated great feats of strength. Marijan was well known for his generosity and donated money earned from his shows to Nikola Tesla to put toward his inventions.

Marian Matijević was in good health all his life until his death in 1951 when he died of pneumonia and was buried in Županja where he lived. People are still telling stories about him and that he could even push train wagons at age 70.