ONE DAY IN LIKA Students’ excursion and a challenging task! 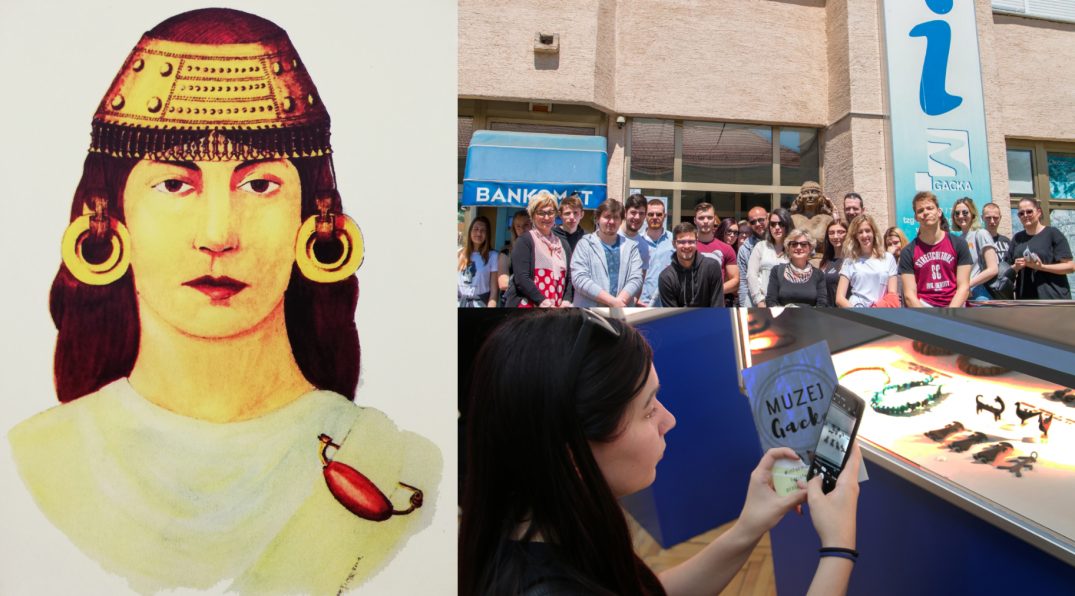 How to develop creative tourist products to attract visitors to Gacka?

First and second year students from the Edward Bernays University College for management in communication came on an excursion to Gacka this summer, as part of an experience-based learning course at the „Management and marketing of a tourist destination“ study programme.

In accordance with instructions for this excursion as part of the experience-based learning at Edward Bernays, the students had to observe tourism development of Gacka through the historic and cultural context, and determine where the difference lies between tourism „development“ and „revitalization“. Their task was to propose new project ideas that can help develop interesting and creative tourist products based on new trends – the economy of experience and storytelling.

Their first contact with this region was the Gacka valley. Springtime and a sunny day enhanced the magical atmosphere of shapes and colours typical for this mystic river. The Chamber of Commerce of Otočac hosted the students and professors and they had prepared a small exhibition on the Iapydes for the occasion. They were also received by the Tourist Board of the City of Otočac, got to know the souvenirs and promotional materials, and made a group photo in the style of „I love Gacka, I love Croatia“. The students’ task was to observe and define the ethos of the revitalization process spreading throughout the entire tourist initiative in the Gacka region. They visited the Runolist cheese factory and were impressed by the methods, quality and high ecological standards in the production of cheese. They saw how the locals involved in tourism can strongly identify with the location and story that lies at the foundation of the tourist offer.

It was also important that the locals actively participate, not just in providing services to visitors, but also in the touristic consumption of the location. They put themselves in the role of locals who need to be able to see the location through tourist eyes, to appreciate it and interact with it as tourists. The students were faced with the challenging task to determine how best to revitalize the story of the Iapydes. Apart from the personal experience and field work, the task also required the understanding of new trends, interpretation methods and presenting heritage in tourism.

Sources state that people already lived in Lika around 1600 BCE, which is confirmed by archaeological findings. In the 11th century BCE an unknown Pannonian tribe inhabited the area, bringing the tradition of cremating the dead and burying them in stone urns.

Science has not yet provided an answers whether this tribe were Illyrians. In any case, the autochtonous population remained in the majority, and the new inhabitants brought better metalworking techniques. By the 8th centure BCE, these two groups grew to become one people which ancient writers registered as the Iapydes.

The land of the Iapydes is not present in Croatian public awareness. Fortunately, it remained documented by Roman and Greek historians, travelers and geographers. The Iapydes population was large, and their people were well organized. They engaged in trade and spread knowledge and ideas, located between the Mediterranean and continental influences. This can be seen in their specific and recognizable artistic expression. What differentiated them from many contemporary peoples was their use of amber.

By getting to know a forgotten culture, the Bernays students got a new perspective on potential tourist resources. How to create a tourist attraction from one potential resource? Custodian Snježana Bogdanić from the Gacka Museum showed them artefacts from the Iapydes period from the museum’s collection, and Ms. Manja from the „Baština“ association shared inspirational stories which created a vision for the future. The Iapydes can indeed become a brand. Their clothes, jewelry, lifestyle, cosmology… all of it can be an opportunity for creating an experience. The students had to choose an artefact they found the most impressive and inspirational, and then create a story based on that artefact that would be interesting to reinterpret and perform. Here is one of the stories that caught our attention the most.

Based on the chosen artefact we created a magical story about the unconditional love between a young man and woman from the period of the Iapydes. The young man was a hunter who went on a hunt the day after their wedding. The morning after the wedding and wedding night the bride gifted her hat to the groom. He kneeled before her, and she places her hat on his head.

The hat was too small so he put it near his chest. He kept the hat, i.e. a knitted web, near his heart and it protected him when he faced a wild beast. He came home to his wife wounded, but alive. His wife’s care and love helped him recover quickly and restore his health. As a permanent sign of affection and as a memento, he carried his wife’s hat near his heart forever. This ritual can be performed once again. Any young couple in love can perform this symbolic act of placing the knitted hat to mark their love. This type of firmly knitted web represents the permanence of love, and is also an archetypal footprint of an ancienty story never told, and the Bernays students’ imagination brought it from the Iapydes period to modern times.

As the students proposed, the story of jewelry, clothing and other artefacts from those times enable the local population to interact with tourists through the deconstruction process organized in the form of a workshop, performance or something similar. That kind of event can be held on a weekly basis, and can be organized partly as a themed tour and partly in an open or closed space. When looking at cultural identity in that way, it can be concluded that it is significantly wider than the borders of just one area, and that this can be an opportunity to extend the tourist season. That is how the symbolism of the mythical Iapydes land and spirit can be restored in the Gacka region. For the students, the basic premise was to see how to spark the imagination of visitors, while simultaneously emphasize the poetic and mythical aspect of the object, i.e. the culture that once existed, thus differentiating the Gacka region, making it special, mystical and magical.

The idea of placing a woman’s hat at the center of a love story between two young Iapydes people is how heritage was revived. Historic personal drama drives visitors’ interest, instead of just delivering facts and information.

The mythical landscape that Gacka truly is cannot easily attract people without such a fantastic story to push it.