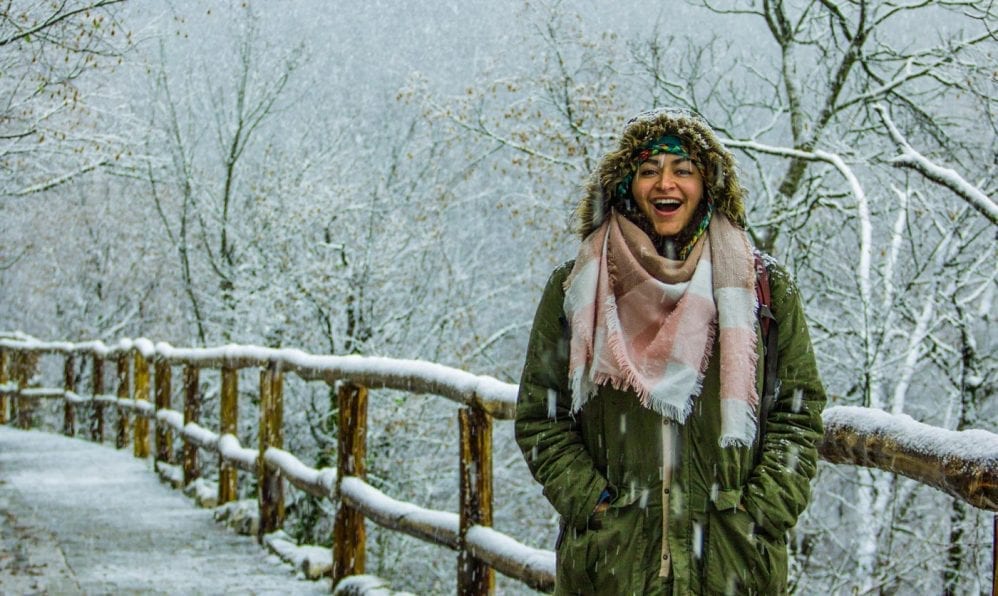 Brett and Alisa are a lively couple of millennials from the Pacific Northwest of the USA who have been in love since 2009 and are known under the name “The miles we share”.  It is a multi-media platform that allows them to share their passions with the world; love, storytelling, writing, videography, mindful travel, and inspiring others to chase their dreams! With us, they shared their winter Plitvice experience and even made a cool video about it.

By the time we reached Croatia, we had backpacked through a decent amount of western Europe and were pretty burned out from seeing cathedrals and cobblestone streets. Being originally from the Pacific Northwest region of the United States, we were both really excited to visit the National Park and to be back in our outdoor element. We researched the Plitvice Lakes and were captivated by the turquoise blue pools that showed up on our screens – that was it. We knew it was going to be beautiful and realized that because we were right in midst of the low season, it would be our best chance to enjoy the place without loads of other tourists.

That morning it snowed and they were so excited!

We wanted to try and capture the day as best as we could, so we grabbed our gear and joined the other hostelers onto the van. Our weather app said we could expect snow for the entire day. What luck! The two of them decided to break off from the others and venture out their own. Half of the park had been shut down due to lakes flooding, but nothing was slowing them down.

The park was absolutely stunning and practically void of other visitors. We could not believe our eyes. Fat snowflakes were falling all around us. It was like being inside of a snowglobe. Our inner child came out as we hiked our way down to the first few lakes. We were genuinely surprised by how brightly colored the algae and vegetation looked, and of course mesmerized by the turquoise pools of lake water. Seeing the lakes in all their glory – it was one of those moments in life when you just have to stop and smile to yourself. We made our way to the largest waterfall, Veliki Slap, that thankfully hadn’t been shut down due to flooding (yet.) We were delighted that we were able to get so close to the rushing water cascading over the rocks. With every passing minute of snowfall, we could feel the intensity of the great waterfall growing.

Later on, they went to the Šupljara cave and were completely awestruck. Steps weaved all the way up through the cave and they were thankful to be temporarily shielded from the snowy downpour.

The cave was impressive and really quite enjoyable to explore, with lots of little corridors and crevices to poke around. We were able to use the flashlights on our phones for the few areas that were completely pitch black! A short climb and it didn’t take very long until we reached the opening where we were met with the awaiting falling snow, once again. Due to the cold, they were the only two passengers on the boat.

If only we could have been more prepared for the cold! We let our excitement of the snow day overshadow our obvious need for umbrellas, even more layers, and all the things that would have kept us dry and warm. Sadly, we had almost none of those things and the boat ride across the lake was literally the harshest cold either of us has ever experienced in our lives. It was the kind of cold that mercilessly goes straight through your bones. Our fingers and toes were completely numb.

In the eternity it took to the cross lake, one amazing thing we couldn’t help but take notice of was how overwhelmingly peaceful our surroundings were. Being in this place and having it virtually all to ourselves, when normally there are hoards of people crowding the park paths, was truly such an incredible experience. The calm isolation was something that we as tourists really appreciated being able to have in such an iconic destination.

When they finally reached the other side of the lake they spotted an open cafe. Salvation!

Cozy and warm, this place was a godsend complete with a wood fireplace to thaw out our frozen limbs and dry off. Of course, we HAD to sip on some hot caffeinated beverages. We were totally content hanging out in the cafe forever, but we knew we the ride back to our hostel would be revving up it’s engine soon.

When their body temperatures finally returned to normal levels, they out headed back towards the park entrance. The Plitvice adventure had come to a close.

Just as we were leaving, we spotted a few of German Shepherd puppies outside the cafe. They were just too adorable to ignore! We made sure to give them as many pets as they allowed us to bestow and the last few slices of leftover ham from lunch. The pups happily gobbled up the tasty treats and after a few last chin rubs, we parted ways from our four-legged friends. We arrived back at the park entrance with about 20 minutes to spare. We discovered hostel buddies had stopped exploring the park after the first hour or so and had spent a majority of the day indoors. All we could think about was how magical our day had been, and the nearly silent sound of snowflakes hitting the surface of the lakes.