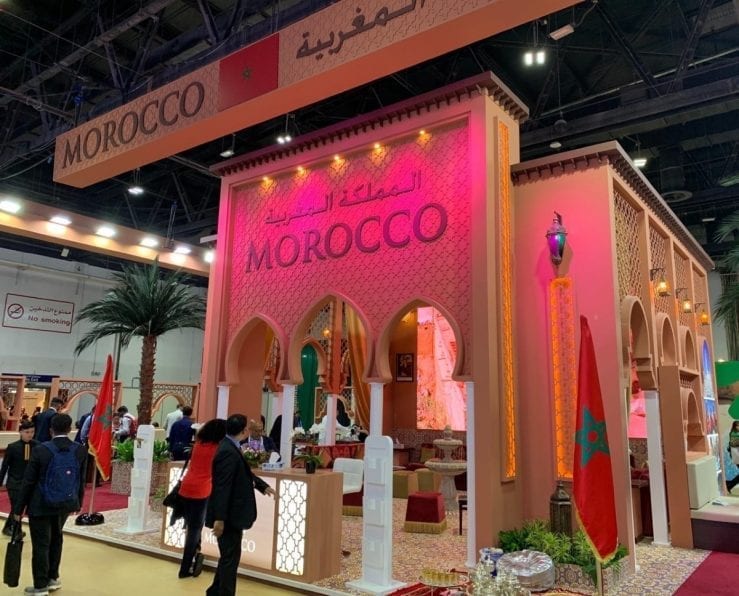 It’s hard to stand out from the crowd when you’re one of 2,800 exhibitors – but the Moroccan National Provincial Tourist Office has been adjudged the Best Stand Design for its authentic representation of a typical Moroccan house at Arabian Travel Market 2019.

Reproducing elements of both a ‘riad’ and a ‘dar’, the Moroccan stand featured a traditional townhouse with pink walls, a courtyard and a fountain, while EXPO 2020 was highly commended for its colourful and engaging stand.

Danielle Curtis, Exhibition Director ME, Arabian Travel Market, said: “Arabian Travel Market would not be the huge success it is, without the incredible amount of effort and investment that exhibitors put into creating and manning these exceptional stands at the show. Since its inception, the annual award programme has not only recognised exhibitor’s efforts but has also encouraged exciting, fresh and creative designs.”

Competition in the Doing Business category was tougher than ever but the judges – Faye Bartle, Managing Editor, Hot Media Publishing; Leo Fewtrell, Managing Partner, Gulf Reps; Nicholas Hall, CEO and Founder of Digital Tourism Think Tank; and Matt Gibson, CEO, UpThink – were impressed by the Marriott International stand for its scale and impact. “The layout of the stand was very inviting and efficient, encouraging both social networking as well as private business meetings. It was exceptionally busy throughout and there was a real buzz and sense of anticipation – it was a stimulating environment,” said Faye Bartle, Managing Editor, Hot Media Publishing.

Babylon Booking’s sleek all-black design and creative use of space meant the Iraqi company won Best Stand within the Travel Tech Show at ATM while Sharjah Tourism’s diverse use of attractions – from a powerboat and photo booths to LED floors and tunnels – meant it was the clear winner in the Best Feature category.

Judges selected The Garden Hotel Company’s stand for Best Stand Personnel and picked out the Guangzhou property for its friendliness and staff knowledge.

Fewtrell, who has never missed an ATM over the past 25 years, said:

“It never ceases to amaze me how exhibitors continually manage to raise the bar, improving the appearance and practicality of their stands, in both subtle and significant ways.”

The winners of this year’s awards were announced at a photo-call on the exhibition show floor on Tuesday 30th April.

Launched in 2015, the Best Stand Awards were created to recognise the design creativity and business-friendly appeal of exhibiting companies’ physical presence at ATM.