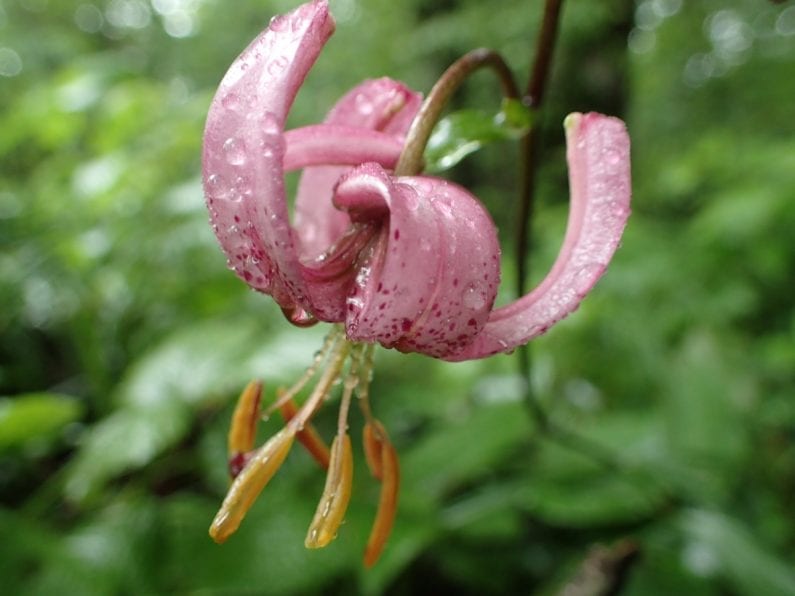 Mihai Bobocea, amateur naturalist and outdoors lover is a man of huge knowledge in the plant and flower area! Well, because Plitvice Lakes with over 50 orchid species are a heaven for every flower lover, Mihai visited Plitvice, and talked to us about his experience from 2016.

“I believe it’s been 10 years since I first saw some pictures taken at the Plitvice Lakes National Park in Croatia. “What a gorgeous waterworld with lush vegetation”, I thought… “I must get there someday”.

I had to wait quite a while before it happened, but I’m happy it did. In June 2016 I scheduled a rafting expedition on some nice rivers in the Balkans and we just had to use the opportunity to also explore the Plitvice Lakes. We allocated a full day for our visit, and I must say I enjoyed every moment of it. It was a very rainy morning when we arrived and the weather did not get any better throughout the day. Luckily, I am never put off by bad weather when I go exploring outdoors. Since it was June, I was expecting the Park to be overcrowded with tourists, but the rainy forecast probably kept most of them away. On another upside, the rain filled all waterfalls nicely so they looked better than in the pictures, against the lush, green background of summer vegetation.

Just before I arrived, I had my mind set on hunting some wild orchid species and I was anything but disappointed. Roaming the Park’s pathways, I soon stumbled upon a rather rare species: Ophrys apifera, the common bee orchid… Wow! It was my first encounter with this species, quite impressive… There are almost 400 Ophrys wild orchid species in Europe, wild orchids which have evolved in close relation with their pollinating insects (bee species). Basically, the flowers trick the male bees into thinking they are female individuals of the same species, thus attracting them and making them engage in a process called “pseudo-copulation”: the male bee mates with the flower and in the process catches the flower’s pollinia, taking them to the next flower and thus performing pollination.

Evolution at its coolest in the plant world! However, Ophrys apifera is the only Ophrys species whose pollinating bee has disappeared (because of natural factors), so this tiny, amazing plant evolved to do it’s own business: just hours after each bee-looking flower opens, it performs self-pollination, making it also the only self-pollinating (autogamous) Ophrys species in Europe. I came across at least 5 specimens of this amazing plant on the side of the paths of Plitvice Lakes, what an amazing encounter!

The eyes and soul were further enchanted by more orchid species: Anacamptis pyramidalis, Cephalanthera damasonium and some late Neottia nidus-avis. A bit later, I came across Orchis militaris and a rather late Neotinea tridentata, both brightly coloured and beautiful. I was also pleasantly surprised to see some nice lillies (Lilium carniolicum and the more common Lilium martagon) and Iris flower species (Iris graminea and a gorgeous golden-coloured one which I never managed to identify correctly…). Lakes, waterfalls, underground photos of fish and their habitats, orchids, lillies… a nice palette of colors and activities, all in one day. In the afternoon, the rain mellowed and we caught a boat, traversing a lake to another part of the Park. It seemed a bit more remote, because our small group of friends found ourselves strolling the paths without encountering any other tourists.

We couldn’t have enough of the waterfalls, I must say we took quite a lot of pictures during that day. As evening came, we had to exit the Plitvice area and move to our next camp in neighboring Bosnia&Herzegovina, preparing for our rafting adventures on rivers Una, Neretva and (later) Tara of Montenegro. I was absolutely delighted by our trip to Plitvice, the place surprised us by looking a lot better than all the pictures I’ve seen prior to the visit. And that happened despite a dull rainy day, that could otherwise ruin our experience – it hasn’t!

To wrap up, I’d recommend every outdoors-lover to visit this amazing waterworld, which I since name “the pride and joy of Croatia”.