Rich planned it for four months, and Nadia had no idea! 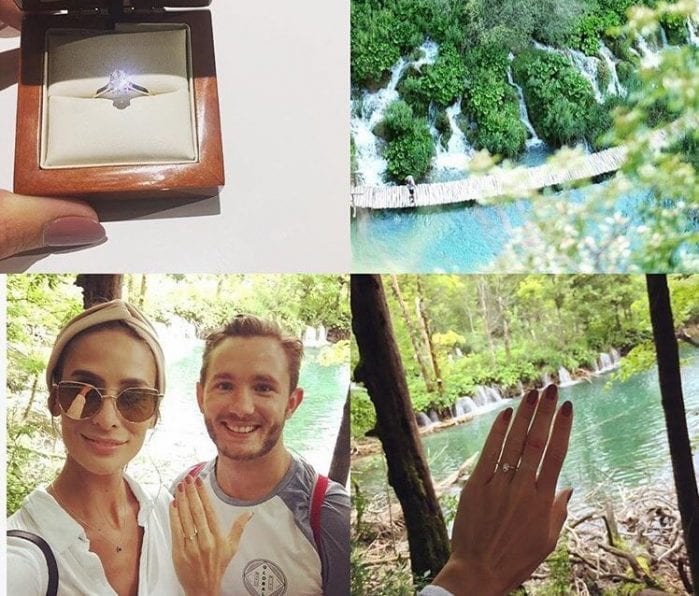 Nadia and Rich, a lovely couple from the UK have been together almost 4 years now. She is a full-time Healthcare Buyer & part-time fashion designer, while Rich is a Construction Site Manager.

They just got engaged in Plitvice Lakes National Park, so we chatted a bit. Here is what Nadia told us about their romantic experience.

How did Rich decide Plitvice will be his ideal location for the proposal?

I had mentioned a while ago that I wanted to visit the lakes. That then must have struck a light bulb moment with Rich and that’s when he started the planning.

How did he organize everything?

We were in Dubrovnik on a family holiday (Rich’s family) Rich had given the ring to his Dad to bring over to Croatia, they even put a note on the box as a message to security in case it got stopped, they didn’t want security to cause a fuss and for me to find out. After a couple of days in Dubrovnik Rich and I hired a car and drove almost 6 hours up to the lakes. About an hour into the walk on the upper lakes (Route H) I asked him to take a picture of me looking out towards one of the falls, he then asked me to turn around towards him which is when I found him down on one knee presenting a beautiful ring whilst asking me to marry him. I was in such shock, it was a wonderful surprise. We stayed at Villa Lika who were fantastic, Rich had told them about his plans and they were so accommodating and made our time really special. They upgraded our room and gave us a bottle of champagne on the house. Really recommend them.

Was this the first time here for both of you?

It was, but certainly won’t be the last!

Did you have any idea what he was about to do?

No idea at all. I always like to know what is going on and always notice if people are acting odd, however I found out afterwards that he started planning the proposal 4 months ago. In that time he has been snooping around asking my dad for his blessing, taking my best friend ring shopping etc. and I had no idea.

Was it as romantic as you thought it would be?

It really was, I couldn’t have chosen a better setting myself. It was really special. Being July, Rich was worried it would be too busy, however he managed to find the perfect spot and timing where no one was around.

Will you return in the future, as a married couple?

Absolutely, We both loved Plitvice. It’s one of the most stunning places we have ever seen. Rich is a fan of Jurassic Park and kept singing the theme tune every time he saw a waterfall (which was a lot) haha. He thought the scenes at Plitvice looked like it was straight out of the movie.