The Grand Prix “Golden Pen” goes to Germany, Slovakia and the USA

For the 17th time, the Croatian National Tourist Board awarded the prestigious “Golden Pen” award to foreign tourist journalists, bloggers and influencers for the best publications about Croatia as... 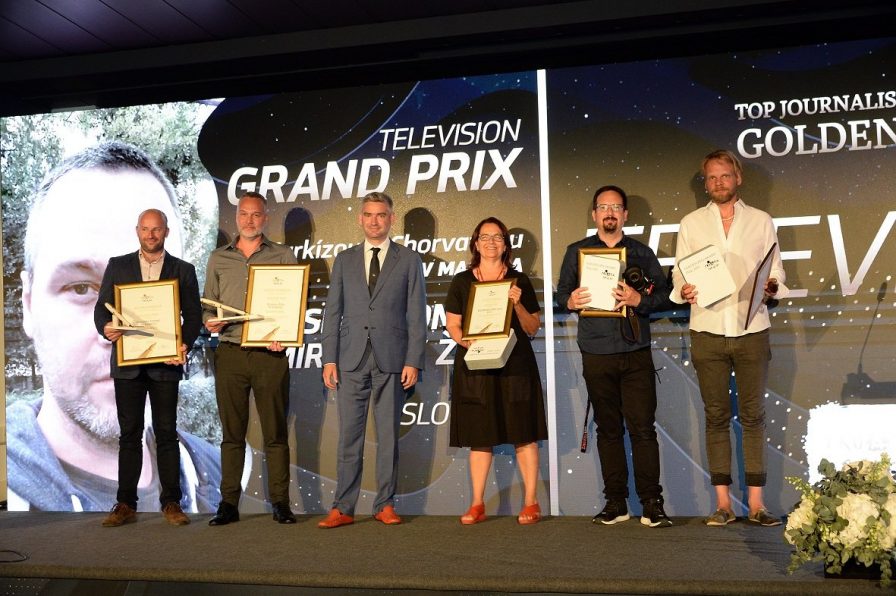 For the 17th time, the Croatian National Tourist Board awarded the prestigious “Golden Pen” award to foreign tourist journalists, bloggers and influencers for the best publications about Croatia as a tourist destination in the last, extremely demanding tourist year. 15 foreign journalists from 11 countries participated in the award ceremony that was held tonight in Pula.

“This year we are awarding the prizes again “live” in beautiful Istria. Award-winning journalists, bloggers and influencers in the last year, one which was extremely difficult for the tourism sector, contributed to the visibility of our country on a global level and helped in building the image of Croatia as a safe, well-prepared and desirable tourist destination. With this, we also look to draw attention to Croatia on the eve of the main part of the tourist season, sending the message that Croatia is absolutely ready for a larger influx of guests”, said the director of the CNTB Kristjan Staničić.

“We are especially pleased to host the awarded journalists and at the same time praise the Golden Pen project, because journalists are extremely important to us even in normal tourist years, let alone in these crises when communication is also the most important promotion. We are glad that the ceremony is held in our region because it gives us an exceptional opportunity to present to the distinguished guests the richness and uniqueness of this region, our hospitality, natural and cultural sights, gastronomy and other strengths by which we are recognized beyond our borders”, said Denis Ivošević, director of the Istria County Tourist Board.

The Grand Prix goes to Germany, Slovakia and the USA

The most significant “Golden Pen” award is the Grand Prix, which is awarded in three categories: for the best report in print or online media, the best radio or television report and the best post on a blog or social network.

This year’s winner of the Grand Prix award for the best report in print media is the German journalist Helene Schmidt, whose report “Istrien – das Kulinarische Kroatien” was published in the renowned magazine Autobild – Reisemobil. In her report, Helena described the journey through Istria and small medieval towns, and especially emphasized Istrian gastronomy, with numerous practical tips for visiting Istria. T

he published report is especially valuable because it was published in a renowned medium followed by motorists, which are the most numerous visitors from Germany to Croatia. Also, the Autobild portal is the leader of the German digital market with over 13 million users and 56 million visits just in last year.

The Grand Prix for the best electronic media report was awarded to the Slovak team TV MARKIZA. Journalist Branislav Tomaga and cameraman Miroslav Žilka won the award for a series of 10 episodes about Croatia called “S Markízou v Chorvatsku”. Branislav Tomaga and Miroslav Žilka have been visitors to Croatia for many years. In order to show their fellow citizens the news from their favorite destination, they tirelessly reported live for two weeks from interesting locations throughout Croatia, from Umag to Dubrovnik, which is why in June and July 2020 Croatia and holidays in Croatia, with 39 percent viewership, were the top topic on the most watched television in Slovakia.

The reports are full of useful information, interesting facts, tips and conversations with the hosts, and are accompanied by scenes of Croatian cities, natural beauty and gastronomy. In a difficult pandemic year full of uncertainty, with their reports from Croatia, they sent a message to viewers that Croatia is an absolutely safe holiday destination.

The winner of the Grand Prix for the best travel blog is Kate McCulley from the USA, who is behind the blog “Adventurous Kate”. So far, she has visited 83 countries and 7 continents, and in 2017, Forbes included her in the list of the 10 most influential travel influencers in the world. With her blog reports during last year’s summer season, she evoked experiences from Croatia, from Dubrovnik to Istria.

Despite the restrictions and the general fear of a pandemic, she pointed out the beauties of our offer and the responsibility and kindness of the local population. She has dedicated a special section on her blog to numerous posts about Croatia and can be found under the title “Destinations Croatia”.

Last year’s Grand Prix winners also took part in the award ceremony, namely journalist Alex Crevar from the USA, who writes for the New York Times, and Czech journalist Vladimir Kouba from TV Nova. The entire award program included a three-day study tour with a tour of numerous tourist sites in southern Istria, including Pula, Brijuni, Fažana, Vodnjan, the archaeological site of Nesactium, the Archaeological Park of Vižula in Medulin and the theme park Kažuni.

By awarding the Golden Pen, the Croatian National Tourist Board emphasizes the value of a professional approach to writing and reporting on Croatia in foreign media, and in this way wants to thank foreign journalists for their contribution in the promotion of Croatian tourism to the world. In previous years, the hosts of the award were Zagreb, Split, Rovinj, Opatija, Dubrovnik, Čakovec, Osijek, Otočac, Zadar, Šibenik, Split, Opatija, Mali Lošinj, Osijek and Zadar.