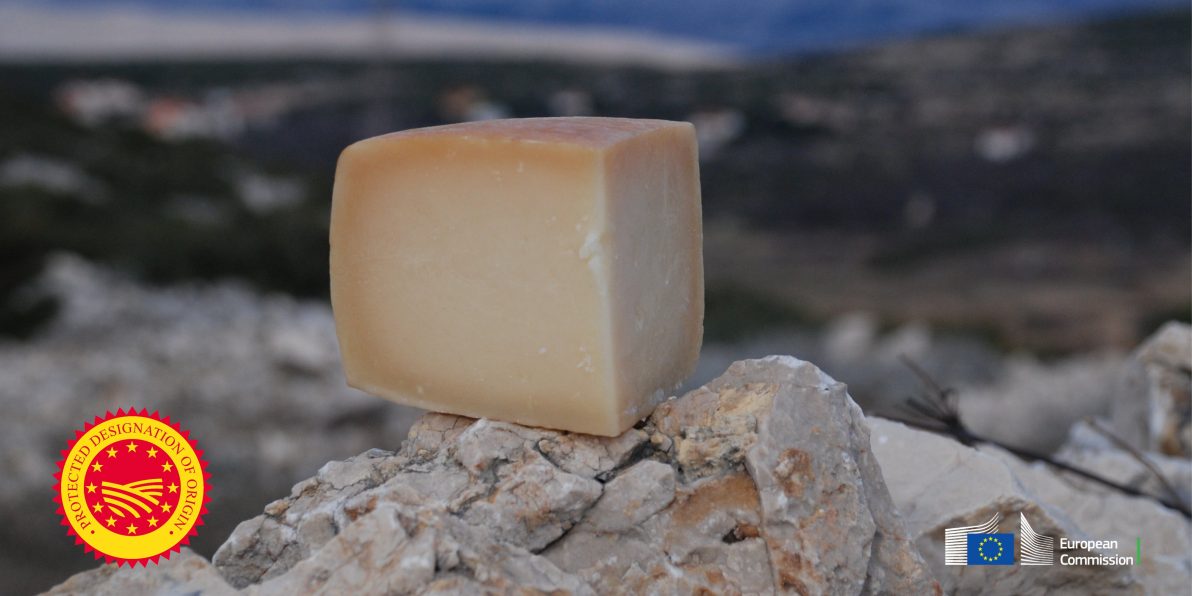 The European Commission enrolled Pag cheese in the register of protected designations of origin and protected geographical indications.

‘Paški sir’ is a hard sheep’s cheese produced from whole sheep’s milk from the island of Pag’s native breed of sheep. The product is matured for at least 60 days before being marketed and has the following physico-chemical and organoleptic characteristics:

The quantity of feed produced outside the area may not exceed 50 % of the dry matter consumed by the sheep over the year.

The specific characteristics and quality of ‘Paški sir’ are due to the specific environmental conditions in the production area, including the plant composition of pastures and the long tradition of sheep farming and production of sheep’s cheese.

‘Paški sir’ cheese is produced on the island of Pag, which geologically falls within the karst area, where land is barely cultivable. The dominant karst relief and Mediterranean climate have influenced the characteristics of the plant cover and the development of sheep farming as the main agricultural activity.

Pag has much less vegetation (in particular tall plants) than the other large Adriatic islands, so much of its land cover is dominated by karst pastures, which are very important for farming on the island as they account for 90 % of total agricultural land.

We have a new Protected Designation of origin from Croatia! 🇭🇷🧀

The tradition of producing ‘Paški sir’ is as long as that of breeding Pag sheep; it developed because of the harsh living conditions, which meant that the islanders needed to make use of surplus milk and preserve it for later use.

For the inhabitants of the island of Pag, the cheese represented first and foremost a reserve of fats and proteins after the milking season, but also a valuable food product which could be traded.

The first mention of sheep’s cheese production on the island of Pag can be found in the Nuovo dizionario geografico universale printed in 1831 in Venice.

However, it is considered that the production of ‘Paški sir’ as we know it today began around 1870. The first records of the method of producing ‘Paški sir’ on family farms date back to 1912 when Ljudevit Tejkal mentions it in the book Sirarstvo u Dalmaciji [Cheesemaking in Dalmatia].

In his book Ovčje mljekarstvo [Sheep milk production], 1947, Nikola Zdanovski states that: Pag sheep are widely known, not only for their excellent wool and the tasty meat of the lambs, but also for ‘Paški sir’.