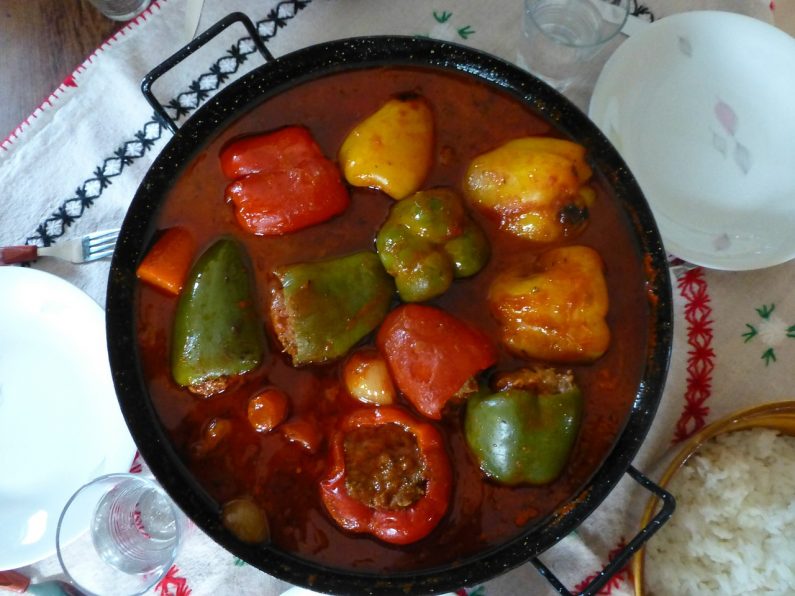 While sarma is most often eaten in late fall and early winter, stuffed peppers are eaten in summer, when they are often served for family dinners throughout Croatia. Although we often avoid preparing cooked meals during the hot summer months, in order to avoid heating up our homes, every family takes advantage of the bell pepper season at least once to prepare this popular speciality.

This favourite dish is made of yellow bell peppers with a thin outer body, which are washed first, then the top and the core are removed and cleaned of seeds. The peppers are filled with ground beef or lamb combined with pork, minced onions, rice, garlic, eggs and spices such as salt, pepper, parsley and even ground red pepper. When preparing the filling, first sauté the minced onions with oil until they are softened, then add the meat and simmer shortly while stirring frequently. After the juices have evaporated from the meat, remove it from the stove and allow to cool off before mixing it with the rest of the ingredients. The mixture is then used to stuff the peppers so that there is space left at the top in order to prevent the mixture from spilling out of the pepper during cooking. The stuffed peppers are placed in a pot with a little olive oil. They should be arranged with their tops facing upwards, half covered in water in which diced tomatoes, salt and black pepper are added. Cook the peppers covered on medium high heat, shake the pot occasionally so that the pepper bottoms don’t burn. Breadcrumbs can be added to the sauce at the end of the cooking process in order to make it thicker.

Since they always taste better the next day, stuffed peppers are often prepared in the evening, when it is less hot. They are usually prepared in larger amounts and eaten for several days. Many families freeze them in order to have a meal ready to eat. Stuffed peppers are most often served with mashed potatoes which wonderfully contrast this favourite aromatic summer dish.

Check out this cool recipe!